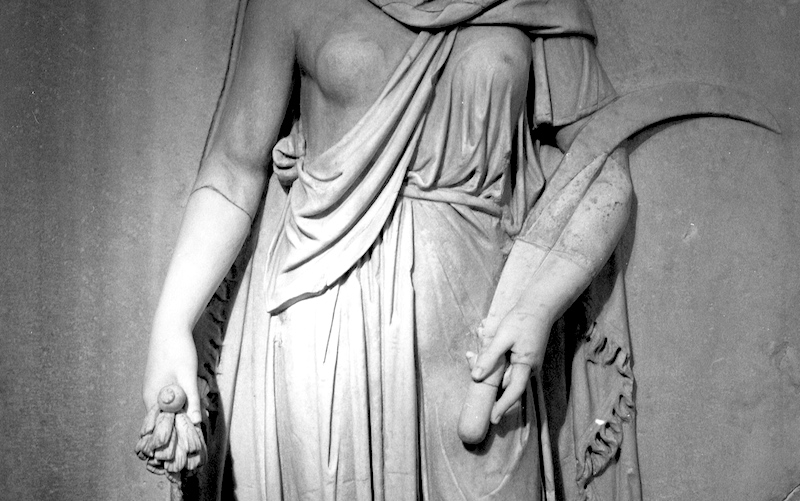 The fall harvest of goods from Anthony and Carol Boutard of Ayers Creek Farm is truly a gift from the gods. Their grains and beans, grown from varieties they have adapted over decades of painstaking selection, play an iconic role on many Oregon restaurant menus and family tables. The same goes for their stunning selection of preserves made each year from only the best portion of their fruit harvest. See below to find out where to buy their products locally.

Demeter has lapsed into her sad repose. We have taken many of photos of the harvest deity. Demeter (Ceres in Latin) is generally portrayed with poppy capsules and barley heads in her right hand, reflecting her association with medicine and food, and a sickle or pomegranate in her left (top photo). The pomegranate a reminder of the six seeds Persephone ate. This simple bust captures the mother’s sadness and longing, subtly and gently, as she patiently awaits her daughter’s return. As we work in our harvest shed, we are reminded that the exuberance of her summer with her daughter leaves the granaries full.

The chap on the right (photo, left) is the Emperor Titus Aelius Hadrianus Antoninus Augustus Pius in long form. Generally regarded as one of the five “Good Emperors,” hence the Pius tagged on to the impressive string of names. Emperor Titus Antoninus Pius was credited as an adept administrator a talent that, to this day, appeals to the Romans. He was the adopted son of the Emperor Hadrian and was designated as his successor. Hence lots of busts and statues are scattered about the bounds of the Ancient Roman Empire, and his visage is stamped into Roman coins of the era.

But it is Demeter who is on our minds. An epic harvest has kept us very busy. Staff has just finished the extraction and cleaning of the pumpkin seeds. We have yet to shell out the popcorn, but there is no urgency because it takes many more weeks for the kernels to dry sufficiently so as to pop well. Nestled on the ears, the kernels will dry more safely. Haste can lead to small fractures in the kernels, robbing them of their oomph. Our trips to Sweet Creek Foods to make the preserves require an extra level of planning. Yesterday, we managed to wrangle the raspberries, Boysenberries and Veepie grapes into glass. Next Friday, we hope to accomplish the same with the currents, jostaberries and Loganberries. The jellies, plums and cherries are on the calendar for December.

The lag in scheduling open days has resulted from the need for careful planning, not plodding. Given the choreography imposed by the virus, we have been unable to organize an open day until now.

We are scheduling open days on Sunday and Monday, the 22nd and 23rd. We will send out a separate, more succinct email early next week for orders (e-mail Anthony to be notified). A December couplet will follow when we finally put the remaining fruit of the year in a jar.

Our beans, grains and preserves are also available in Portland, saving you all a trek out to the farm. You can find them at Providore Fine Foods (Pastaworks has preserves, Rubinette has grains and beans); Real Good Food; and Coquine.

This is a banner board using poplar, another fairly soft wood. The motifs for the sun and rain are influenced by those used by 20th century Japanese woodblock makers. The red ink is used by Japanese artists for their hanko—a signature stamp.

It is simplistic and imprecise shorthand to call something “Local" or "Oregon Grown.” And given the complexity of bioregions within the state, completely meaningless in terms of the influences on flavor, quality and spirit when it comes to what we grow here.

Our harvest is wrought from the soils and climate of Gaston, perched as we are on a bench above Ayers Creek with its heavy but fragile clay soils, and a hard-edged climate forged as it is between the montane anvils of the Coast Range and the Tualatin Ridge. Travel a few miles to the north or south, the climate and soils are a world apart. The challenges posed by the soils and environment of Gaston have pushed us into growing our own seed selections and varieties. All good reasons to use the ink of a hanko on the banner.