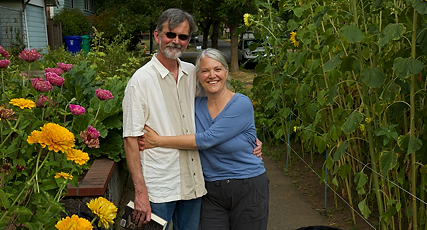 Ode to a Long Marriage: A Tall, Taciturn Guy from Maine

With Dave and my 41st anniversary coming up, I thought I'd post this essay I wrote for my friend George Rede's blog on the eve of our 40th anniversary.

Forty years ago, on August 1, 1981, I married a tall, taciturn guy from Maine. We’d lived together for four years after dating briefly, as was the custom at the time, and he’s credited with getting me kicked out of my parents house when I called them late on a Saturday night to let them know I wouldn’t be coming home so not to worry. Acquaintances would still occasionally ask if he ever talked, so quiet was his demeanor back then (and so chatty was mine that he had a hard time getting a word in edgewise).

As a newspaper reporter he was part of the generation that smoked and drank coffee at work, doing interviews over the phone with a cigarette dangling from his lips while banging away on an electric typewriter or scribbling in an unintelligible scrawl in the long, thin, spiral-bound reporter’s notebooks in use at the time. In his first job at the small newspaper in The Dalles he was also the photographer and darkroom guy, with a couple of Nikons to his name that were so heavy legend had it that in an emergency they could serve double duty as hammers.

I was working as an ad production artist at the same paper, a job my father finagled for me when I was living at home (briefly, see above) on a break from college after several months studying abroad in Korea and Japan. The first time he spoke to me was to ask me if I was interested in a kitten, which I declined. The second time he asked me to guess where he was from, and I blithely tossed off “Maine” since he had no trace of an accent that I’d heard—he was quiet, remember—and I answered with the name of the state that was as far as I could imagine from Oregon. (We now call that sort of prognostication a “Kathleen moment” around here.)

Our first date was when he offered to drive me home from work late one evening, and when he pulled up to my parents’ home in his 1963 primer-gray Chevy pickup I said, “Want to get a beer?” We walked to the Sugar Bowl, a divey tavern two blocks away and shared two pitchers of Miller, the beer of choice for rebels who didn’t drink Bud—these were the days before microbrews—over the course of the next two or three hours. Afterward, when he dropped me off at home, I mumbled something to my parents about not being hungry and stumbled upstairs to bed.

That bleary evening over beers he’d discovered that on the trip to Korea I’d been using an old Voigtländer bellows camera of my father’s and had piles of negatives that hadn’t been printed, so we spent many evenings in the paper’s darkroom printing proof sheets and prints, which led to trips to local landmarks on photography expeditions. I learned that, far from being a silent Sam, this guy was smart, talkative and hilariously funny, all qualities—including his love of cats—that made him someone I wanted to spend time with.

My parents eventually came around, though were a bit taken aback when his first Christmas present to me was a rather large ax. (I had a tiny fireplace in my apartment and, being a practical New Englander, he figured I might need to split some wood for the fire.) Over the intervening decades and the cats—too many to count, really—five dogs and a child, he’s become a master baker of sourdough bread and pastries, a dedicated mixologist, and fanatical griller, not to mention the muse and inspiration behind my blog, as well as my biggest supporter.

Whenever I head off on some new venture? He says, “Have fun.” And because of him, I can.