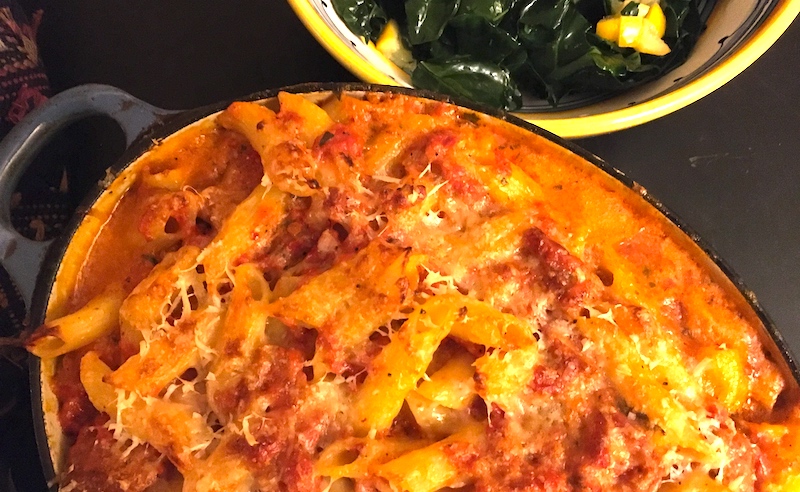 Pandemic Pantry: Sausage and Pasta Casserole with a Kick

I suppose you could call us the casserole generation. We were one of the first cohorts of children whose mothers were entering the work force in the largest numbers since WWII, mostly because inflation had been whittling away at the salaries of "breadwinners" (mostly dads) for years. But women were still expected to do all their "mom" duties like laundry, housecleaning and, of course, shopping and cooking, in addition to putting in 40 hours on the job.

That meant my mom came home from her work as a social worker after an hour's commute and had to get dinner on the table fairly quickly while my dad, who (bless his heart), came home around the same time, turned on the nightly news, put his feet up and sipped a scotch and water until Mom called us in for dinner.

So with three hungry kids and a husband to feed, I can't blame my mother for welcoming convenience foods like Hamburger Helper with open arms, or making classics like Swiss steak and Spanish rice that could simmer away in the electric frying pan while she ran upstairs to change out of her work clothes.

(Did she have a glass of wine in her hand? Maybe…) 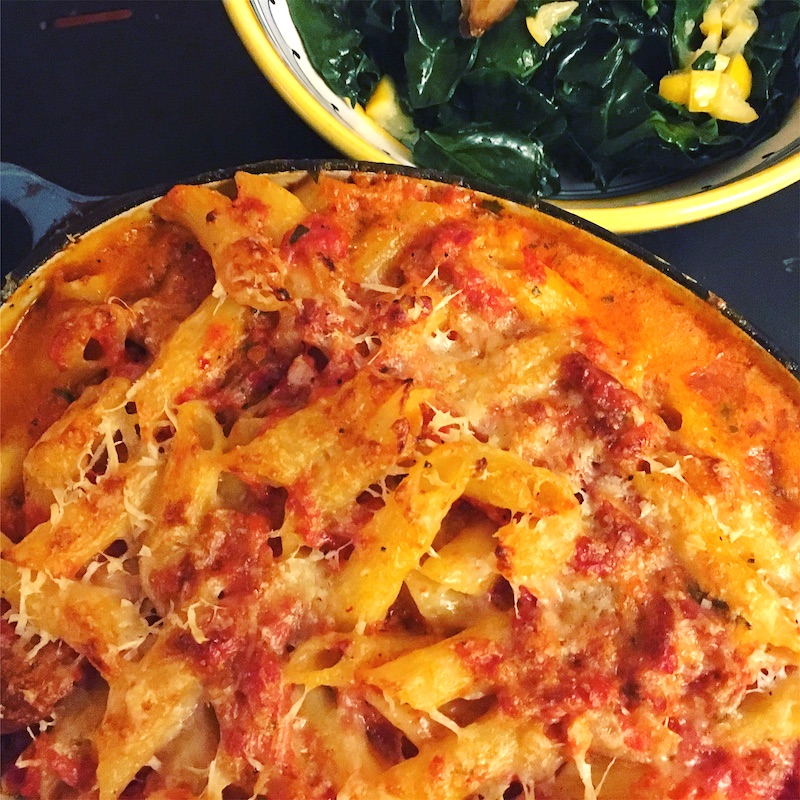 Noodle casseroles figured prominently in the pantheon of dinner menus—the "primavera" version hadn't yet appeared and fancified it into "pasta"—with goulash, macaroni and cheese and, on Fridays, the holy tuna version. (I was never sure why fish on Friday was a requirement since we weren't Catholics, though I suppose Episcopalians run a close second in the rules-ridden churchy hierarchy.)

As the female child, I was called on to put down whatever book I was currently immersed in to help my mother with prep chores and getting dinner on the table. It meant I learned to chop and mix and simmer early on, which I suppose cemented my inclination to appreciate the tastier parts of life. For that I'm thankful.

The recipe below—which involves little prep but calls for two-and-half-hours of simmering—would have been unthinkable for a weeknight dinner in my mom's day, but it's do-able in pandemic times since so many of us are spending scads more time at home. (And everyone needs an occasional break from Zoom meetings, right?) It's a variation on the perennial penne alla vodka served at 3 Doors Down café, which itself starts with a variation on the classic Marcella Hazan tomato sauce with onion and butter.

As the classic commercial from my childhood trumpeted, "Try it, you'll like it!"

In a heavy-bottomed saute pan or skillet, melt the butter and add onion and red pepper flakes. Cook over medium-low heat until onion is translucent. Stir in the whole tomatoes with liquid and simmer for one hour. Add the sausage coins, vodka and oregano and continue to simmer for another hour. Turn the heat to medium high, add sour cream (or cream) and stir constantly for 10 minutes. Reduce to simmer and to cook for another 30 minutes.

During the final half hour of simmering the sauce, bring 4 quarts of water to boil in a large pot. Drop the pasta in the boiling water and cook, stirring frequently until tender but still firm to the bite, a little less done than usual "al dente." Drain well, put back in pasta pot, add sauce, then toss pasta with sauce and 2/3 cup grated cheese. Adjust for salt. Pour into 2 3/4-qt. casserole dish and top with remaining cheese. Bake for 15 minutes. Remove from oven and serve.