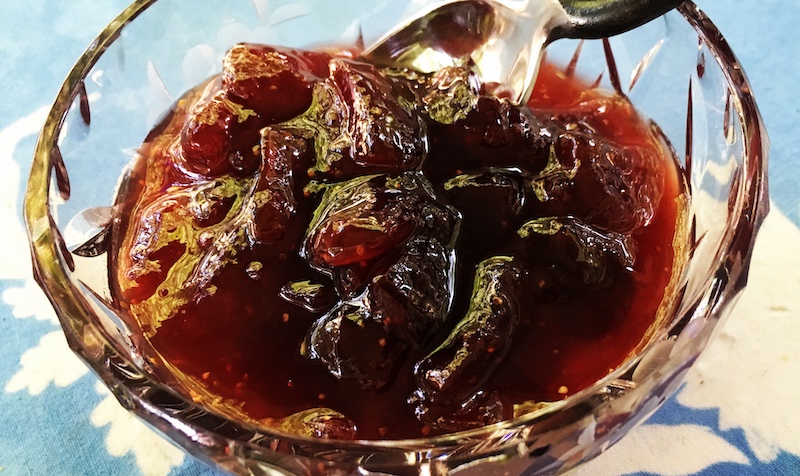 The combination of dogs and a walkable neighborhood gives me the perfect excuse to go on reconnaissance missions around my neighborhood, looking—some might call it snooping—on parking strips and in front yards for fruit trees. Having older dogs that, like toddlers, are more interested in process than destination, I've taken the opportunity to note the plum, Italian prune, fig, pear, apple, cherry and persimmon trees on our various routes.

Some are gnarly old things that predate the bungalows built in the 1920s, the only surviving remnants of the orchards and farms that used to dot the countryside between the small towns like Sellwood, Albina, Multnomah, Kenton, Lents and St. Johns that were eventually annexed by Portland. Others were planted as street trees in the intervening years, though I wonder if the hapless homeowner who planted the giant walnut tree in his front yard thought about the terminal velocity of ripe walnuts when they drop 60 feet onto his car (or his head).

In any case, just around the corner from us is a fig tree that was planted around a dozen years ago that the homeowners had tried to espalier along a short retaining wall. The scent of the leaves was intoxicating on warm summer nights, but it never bore fruit until the house sold and the new owners neglected to trim it back. The next year there were big, dark brown figs dangling from its branches and I began stalking the house, hoping to strike up a friendly, if self-serving, conversation with the new owners.

A few weeks ago I finally—aha!—caught the sister of the owner carrying groceries into the house and casually asked if perchance they ever used the figs or would…ahem…mind sharing some of them. She said she was hoping to dry some, but there were way more than she could use, so I could help myself.

Score one for persistence!

So yesterday, shopping bag in hand, I walked over and plucked five or so pounds. They were delicious for eating out of hand, and I made the rest into a stellar jam using a recipe from Martha Rose Shulman as a guide, though I doubled her recipe and used a bit less sugar than she called for.

In a large bowl, toss together chopped figs and half the sugar. Cover bowl with plastic wrap and refrigerate for 1 hour.

Transfer figs and sugar to a medium-sized saucepan. Bring the mixture to a boil, stirring frequently to prevent scorching. When mixture comes to a boil, scrape back into bowl and cover with plastic. Let cool and refrigerate overnight.

Scrape fig mixture back into the saucepan. Place a small plate in the freezer to use for checking the thickness of the jam as it cooks. Bring the fruit back to a boil over medium heat, stirring frequently. When the mixture comes to a boil, stir in the remaining sugar, the lemon juice and the balsamic vinegar. Boil, stirring, until mixture is thick but not too concentrated, 10 to 15 minutes. Skim off any foam that accumulates. I also skimmed off some of the seeds that cluster at the surface, though it's not necessary to skim off all of them. (Dipping the back of a soup spoon into the seeds works like magic!)

To test for doneness, remove the plate from the freezer and place a spoonful of the jam on it. Wait about 20 seconds and tilt the plate. The jam should only run slightly, and fairly slowly. Boil a little longer if it seems too runny, but take care not to cook it until too thick. It needs to be spreadable.

Transfer the jam to clean jars, wipe the rims and place canning lids on top. Place canning bands over the lids but don't tighten bands more than finger tight. Allow to cool, tighten the bands, then refrigerate or freeze.