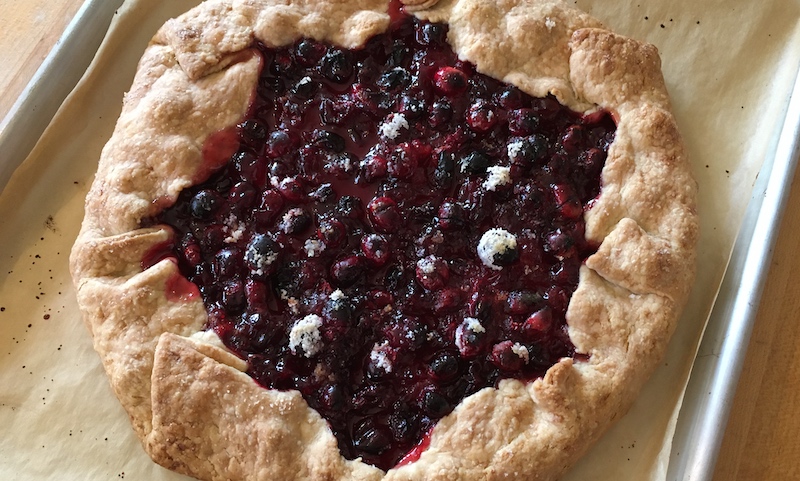 Oregon cranberries are one of those somewhat under-the-radar crops though, in fact, cranberries are native to the Northwest. The berries have been harvested by indigenous people for millenia and were (and still are) used fresh and dried in many traditional foods. They were traded widely among First Nation people on traditional trade routes, along with salmon and other products.

Cranberries were first grown commercially in Oregon by Charles McFarlin, who settled in Coos County after failing, like so many others, to make a fortune during the Gold Rush of the late 1800s. He planted vines he brought from Massachusetts, later developing a variety known as McFarlin that is still grown today.

Most of the state's cranberries are grown in Coos and Curry counties on the South Coast and, at nearly 3,000 acres and accounting for 95 percent of the state's production, it's just five percent of the nation's commercial harvest. Most cranberry growers are heavily reliant on pesticides and herbicides to control insects and weeds that can devastate crops, but there's a growing number of farmers who are transitioning to organic methods.

While small in number, organic cranberry farmers are joining forces and sharing successes and challenges, according to an article from Oregon Tilth, one of the region's largest organic certifying agencies. It says that state agricultural agencies, which normally provide support to farmers, are almost exclusively geared to conventional growers and aren't up to speed on the specific needs and challenges of organic farmers, so this homegrown network of organic growers has become critical to the success and availability of locally grown, organic cranberries.

“It’s been a steep learning curve,” according to cranberry farmer Richard Schmidt, who is quoted in the article and, with his wife, Pam Schmidt, owns Schmidt Berries in Bandon. “We’ve really relied on our neighbor, Ty Vincent, and his dad, Bill Vincent [of Vincent Family Cranberries]. They were the ones that put the farm into transition [to organic] after 30-plus years of traditional practice. It’s their expertise and practical experience that have made our new inexperienced farmer reality much easier. They are the essence of succession in a community. We’d never really been farmers before, and had never lived or farmed on the Oregon coast…we mainly rely on our neighbors. We’ll help them harvest, and they help us harvest. They’re organic too, so we can share equipment, which is kind of nice.”

You can find local, organic cranberries at some stores and area farmers' markets, and I can't say enough about the flavor of these ruby-colored jewels in jams, chutneys, sauces and, of course, pastries. This recipe for a cranberry tart is one of those can't-miss, smash hits that has been the raved-about culmination of two dinners so far this season!

In a food processor, combine the flour with the sugar, salt and butter and process for about 5 seconds. With the processor running, drizzle in the ice water over the flour mixture until the pastry just begins to come together, about 10 seconds. Transfer the pastry to a work surface, gather it together and pat into a disk. Wrap the pastry in plastic or wax paper and refrigerate until chilled, about one hour.

Just before the dough finishes chilling, place cranberries in a large bowl and add sugar, liqueur, cornstarch and orange zest. Remove dough from refrigerator and place on well-floured surface. Roll out into large round approximately 14-15" in diameter. Transfer to large, parchment-covered baking sheet (I usually fold the dough in half very carefully, transfer it to the sheet and unfold it). Brush the bottom of the dough with a very thin coating of egg white to within 4" of the edge. Place cranberry filling in the middle, keeping it within 3-4" of the edge of the dough. Lift the edges of the dough and fold over on top of filling, pleating it slightly to keep the tart's rounded shape. An option here is to brush the dough with egg white and sprinkle it with sugar to give it a shiny appearance.

Place in oven and bake at 375° for one hour or so until filling is bubbling and crust is golden.

Photo of cranberry bog from USDA. Photos of harvest from Vincent Family Cranberries.