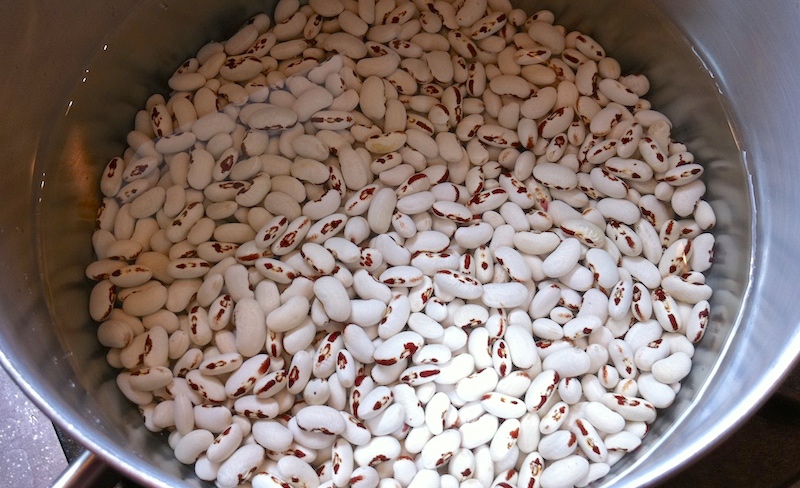 Some cooking techniques are writ in stone. Preheating your oven before baking. Rinsing basmati rice in several changes of water before cooking. Stuff like that. Others are matters of debate, with pros and cons argued vociferously on either side. One of those is soaking dried beans overnight before cooking. To no one's surprise, I give credence to contributor Anthony Boutard of Ayers Creek Farm's explanation (see below), who, in my opinion, with Carol Boutard, grows some of the finest beans in all the land.

Why has the practice of soaking grains and beans prior to cooking persisted for several millennia? Biologically, two separate events occur when the bean awakens in the presence of moisture.

Germinating seeds release into the surrounding soil nasty compounds when they germinate. These compounds discourage insects, fungi and bacteria from attacking the seedling before its own defenses are developed. Some seeds also release compounds that prevent neighboring seeds from germinating, a phenomenon called allelopathy. Some people claim these compounds are nutritious and tasty.

I suggest tasting the soaking water and decide for yourself whether the stuff is tasty…it isn’t. This is one reason why people traditionally soaked grains and legumes, and then drained the soaking liquid before cooking them.

There is a second reason, more of an aesthetic gesture. The seed is very carefully packaged to provide energy in the form of simple sugars and building materials in the form of amino acids when it breaks dormancy and the embryo begins to grow. Millions of simple sugars are connected together to form starch molecules. The amino acids are connected to one another to form proteins. The starches and proteins are densely packed around the embryonic plant. When the seed germinates (i.e. soaked overnight), specialized enzymes snip apart the starches and proteins, and those unpacked units are then assembled to grow the plant. Imagine a pallet of lumber that is strapped together, efficiently packaged for storage and transport, but not yet a house. The enzymes are akin to carpenters, pulling the pallet apart and reassembling it. They also need energy to fuel their work in the form of simple sugars until the seedling is ready to photosynthesize its own food.

Cooking without soaking relies on the brute force of heat to break apart the package rather than the elegant, gentle, natural mechanism given us in the simple seed. Akin to running over the pallet with a bulldozer. I find the flavor and texture are better with soaking, a bit sweeter and smoother. I cannot fathom the objection to soaking them overnight, as though it is some major inconvenience. Bear in mind, the farmer spent several months tending the crop for your table.  What’s a few more hours to do justice to the farmer’s careful effort?

You can find a good selection of Ayers Creek Farm dried beans at Rubinette Produce.