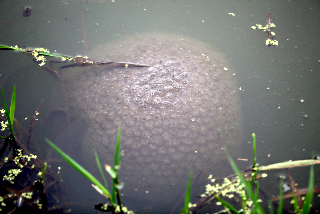 Cows, sheep, chickens…sure. Normal farm animals. Stretch a little and maybe you'll come up with birds, bees, bugs. Even coyotes or other predators. But contributor Anthony Boutard of Ayers Creek Farm in Gaston has noticed yet another creature that calls his farm home.

Our trips to the irrigation pump are less frequent as temperatures moderate. We are starting to withhold water from the annual crops. For the berries, however, watering through September is critical so the primocanes, which will bear next year's crop, can put on as much growth as possible. Heavy canes bear better fruit. Winter crops like the cabbages, chicories and parsnips must also receive a good dose of water for good root development. When starting the pump, we watch the water carefully for any changes in quality. 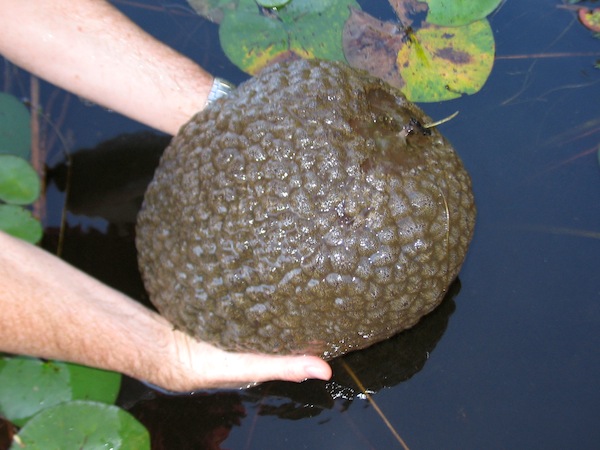 This week, a new creature appeared near the pump station. A large moss animal, or Bryozoan, was drifting in water (top photo). A gelatinous mass about the size of a soccer ball, it is known to bryozoologists as Pectinatella magnifica (left, from Wikimedia). It is the largest of the 22 freshwater moss animals found in North America. Most are delicate creatures that go unnoticed by all but a handful of dedicated professionals. Pectinatella is hard to ignore, and brought us back to invertebrate zoology class.

The bryozoans are invertebrate animals with a nervous system and a gut, and in the same general evolutionary branch as sea urchins and lamp shells. They feed on bacteria and algae using feathery tentacles reminiscent of corals. Like corals, they are colonial animals, and the large mass drifting in our irrigation channel is actually a colony of individuals that are fused together in the gelatinous matrix. Ambling along the bank, we saw several other colonies ranging in size from a softball to a medicine ball. They need warm, clean water. As the water temperature drops below 60 degrees (15 C), the colonies will die. The species carries on by producing a resting stage called a statoblast, and next year these will grow into new colonies.

Most of 4,000 or so bryozoans are marine animals, and attach themselves to rocks, piers and ship hulls. Of the many animal orders covered in invertebrate biology class, we would nominate a bryozoan as an unlikely resident of a Willamette Valley farm. Obviously, we weren't paying attention to the mention of 50 freshwater species separated into the Class Phylactolaemata, and their preference for clean, still waters.

Water is every farmer's vulnerability. We fret constantly about the supply, delivery and quality. Seeing this stately creature drifting slowly in the water, with its ancestry stretching back 450-million years to the Ordovician Period, provided a comforting benediction on the irrigation ditch.