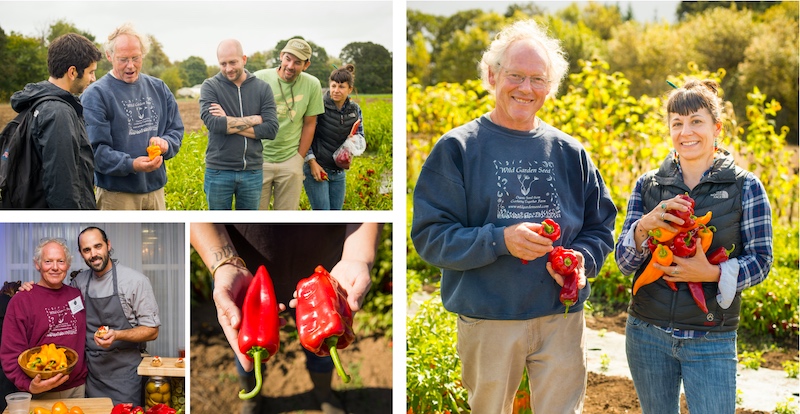 How Italian Sagre Inspired a Joyful Celebration of Local Vegetables

The Culinary Breeding Network was founded by Lane Selman, an assistant Professor of Practice in the Horticulture department at Oregon State University, in order to start a conversation between plant breeders, farmers and the public about bringing more flavor to our food. In this essay she recalls the beginnings of those conversations and how they have evolved into a global network of discussions. Scroll down to get the schedule for this year's Winter Vegetable Sagra on Saturday, Oct. 24, and links to the segments as they are posted.

The first time I encountered the Italian concept of the sagra was the very first time I went to Italy in 2014. It was near the end of an epic day of overstimulation at Slow Food’s international Terra Madre gathering in Torino. At a quiet booth along one side of the Salone del Gusto, I came across a small, accordion-folded pamphlet advertising something called the Fiera Regionale della Zucca, the regional pumpkin fair of Cuneo, Italy.

On the cover was an illustration with an adorable gnome sitting under an archway made of pumpkins in the piazza of a medieval town. The inside listed three days of squash-filled festivities, from pumpkin cooking demonstrations and meals featuring pumpkin in every course, to squash carving expositions and classes for kids about how to make musical instruments out of winter squash. The sensation was one of immediate recognition, like discovering a word for a feeling in another language that your own lacks—the way political junkies must feel the first time they hear the word schadenfreude, or nostalgic lovers learning about saudade.

At that time, I was working as an agricultural researcher at Oregon State University, and moonlighting on the side as the market manager for an organic vegetable farm. But the last few years, something else had been taking up more and more of my time. I’d been hosting events—what I called “parties”—to build some connections between the people who breed plants, and the people who eat them.

If the world of vegetables was the land of Oz, plant breeders would be the wizard behind the curtain. They have a huge amount of power over the foods we eat, but they’re only human. They can’t read minds to know, for instance, that chefs like smooth-shouldered peppers because they’re easier to chop without waste, or that most winter squash is sold in the days before Thanksgiving. And since most of us don’t really know that plant breeders exist, let alone know where to find them, we can’t tell them about the qualities we care about most. I wanted to reconnect academic and commercial plant breeders to their communities by creating opportunities for consumers to give feedback about in-progress breeding projects, but “party” just sounds a lot more appealing than “feedback session.”

If the world of vegetables was the land of Oz,
plant breeders would be the wizard behind the curtain.

My first party was a pepper party. I asked several local plant breeders to share the fruits of their current pepper breeding projects, with the goal of getting some solid feedback from chefs and consumers about which varieties they liked most. We tasted dozens of pepper varieties, raw and roasted, with the goal of helping shape the release of a new open-pollinated variety to replace an old hybrid that was getting hard to find. I went into it hoping pepper breeders would walk away with a better sense of which breeding lines consumers found most appealing. What I didn’t expect was just how fun the event would be—and what a sense of community it seemed to immediately create.

In hindsight, I’m not sure why I was surprised. It’s a truism that food brings people together, but the specific kind of energy I sensed at the pepper party was different than the generic good vibe of a dinner party. It was pleasure with sense of purpose and creativity, a feeling of community reinvestment in a food system that, in the United States, has long felt divorced from everyday life—hidden away behind a curtain.

That chance encounter with the brochure at Terra Madre gave me a new word, a new language, for these gatherings: Sagra. In Italy, a sagra is a festival, usually centered around food. The word comes from the Latin word sacrare, to consecrate, which refers to Italy’s centuries-long history of bringing together—consecrating—a community with feasts that celebrate the harvest.

Ancient sagre usually had a religious aspect, and were celebrated in front of temples or churches during the Medieval era and often linked to specific saints or feast days. In addition to elaborate meals, sagre sometimes incorporated historical traditions, rituals, or sporting events, like horse racing or a cuccagna tree. Modern sagre are distinctly more secular, something like a cross between a state fair and a church picnic, but they haven’t lost steam; some estimate 20,000 to 30,000 sagre are held in Italy every year, usually between the months of June and September (prime outdoor dining season). They’re casual, family-friendly affairs, and many attract a mix of international and domestic tourists. Almost as a rule, they’re unpretentious, sometimes to the point of hokey—think fried foods, cheap souvenirs, and dunk tanks.

Inspired by that humble trifold, when I returned home to Portland, Oregon, I teamed up with fellow researcher Alex Stone to throw our most ambitious event yet: Squash Sagra. We had been working on winter squash breeding trials for several years. One of the most common complaints I heard from growers was that Americans bought most of their squash around Thanksgiving—but many winter squashes don’t taste really good until, well, winter. Could an epic Squash Sagra (despite hosting it in an unheated, albeit very groovy, old warehouse) get more Portlanders to buy and eat winter squash in January, February and beyond?

Squash Sagra 2017 was a blast. We had squash “butchery” demonstrations. We served samples of squash-y delicacies, from savory dips to pumpkin ice cream. We demoed recipes. We let kids paint squash. We had a “cucurbit cuddles” photo booth. Many squash-themed outfits were spotted. And so, we kept going. The next year our sagra included squash and beans. In 2018, Chicory Week was created with farming and restaurant partners that includes an annual Sagra di Radicchio in Seattle.

Then, in 2019, we went to the next level when we attracted about 1000 attendees to celebrate nine fresh and storage vegetables at the Winter Vegetable Sagra in Portland in that same, but recently beautifully renovated and heated, old warehouse. In addition to turning people on to these often under-appreciated locally grown winter foods, the word sagra was introduced to many Americans vocabularies.

We share the same vision in weaving together education,
advocacy and joy into these celebrations.

In early 2020, right before COVID-19 descended on the globe, I even partnered with my friend and Italian farmer Myrtha Zierock to take a group of American radicchio growers, chefs and advocates to northern Italy on a Radicchio Expedition to learn more about this quintessentially Italian crop. We visited radicchio farmers and breeders throughout the Veneto, Trentino-Alto Adige and Fruili-Venezia Giulia regions for five days, culminating in a winter vegetable celebration called Giàz (meaning ‘ice’ in the Trentino dialect) at Foradori winery in the Dolomites. Myrtha claims her vision for Giàz was inspired by the sagre we have organized in the US which is a deeply appreciated compliment coming from an actual Italian. We share the same vision in weaving together education, advocacy and joy into these celebrations.

When my family came to the United States from Sicily in the 1920s, they were eager to leave their homelands behind and assimilate into American culture. I grew up surrounded by my Sicilian-American family, but nobody spoke Italian to me (despite my great-grandmother neighbor that nearly only spoke Sicilian dialect), and the first time I ever visited Sicily was as an adult during that trip in 2014. Like so many second and third-generation immigrants returning to their ancestral homeland for the first time, I experienced that dizzying sensation of feeling simultaneously like a tourist and as if I was surrounded by a vast family for the first time: people who looked just like my grandparents, like my cousins, like me. Re-establishing a personal relationship with Italy and Sicily over the past six years has brought a new layer of meaning to my life. Developing my own version of sagre at home the United States that fuse American and Italian traditions has been a major part of that experience.

I can’t claim that the Culinary Breeding Network’s sagre are “authentic” in any particular way (although few Italians would argue that modern Italian sagre are an authentic expression of Italian culture, either). Like any imported cultural artifact, there’s something altered in the translation. But that chance encounter with a whimsical squash brochure in Piemonte years ago planted the seed for an idea that I hope helps Americans get more excited about eating regional foods by skipping the preachy eat-local lecture in favor of enjoying delicious foods (and wearing hats shaped like a slice of pumpkin pie) in community.

Undeterred by the pandemic, this year's Sagra del Radicchio is going online on Saturday, Oct. 24, with a full day of rad and bitter programming. Dip in and out as you please, and all content will be posted for later viewing (see links with each segment):

Tune in via YouTube. The schedule (all times are PDT):

9:00 am: Intro and History of Radicchio Cultivation with Andrea Ghedina of Smarties.bio. Watch.

10:00 am:  Travel to Northern Italy with Myrtha Zierock and Lane Selman, organizers of the Radicchio Expedition.

1:00 pm:  Farmer Chat and Virtual Raw Bar with Siri and Jason of Local Roots Farm, and Tim and Caroline of Kitchen Garden Farm.

2:00 pm: Seed: Where it all Begins with Brian Campbell of Uprising Organic Seeds and Linda Fenstermaker of Osborne Quality Seeds.

3:00 pm: Station Break: Stand up, go in the kitchen, and make a fabulous radicchio feast!

5:00 pm: Happy Hour! Pour yourself a glass of amaro and join us for a virtual hangout.