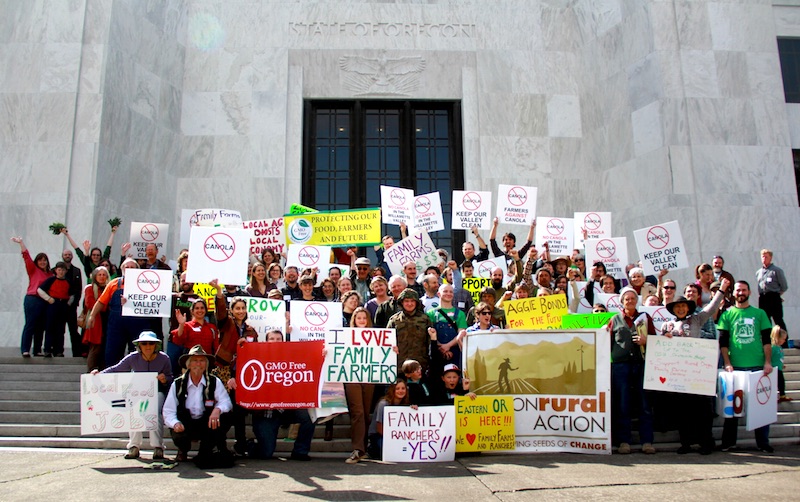 Care About Your Food? Then Show Up in Salem!

In the last two years, we've all learned the value of just showing up. Two years ago, not showing up to vote cast this country into the nightmare we are living through right now. And showing up to a rally for women's rights demonstrated to the world the power and importance of women's voices. In the mid-term elections just last fall, sending postcards to complete strangers urging them to vote, and exercising our own franchise changed the balance of power on a national level. 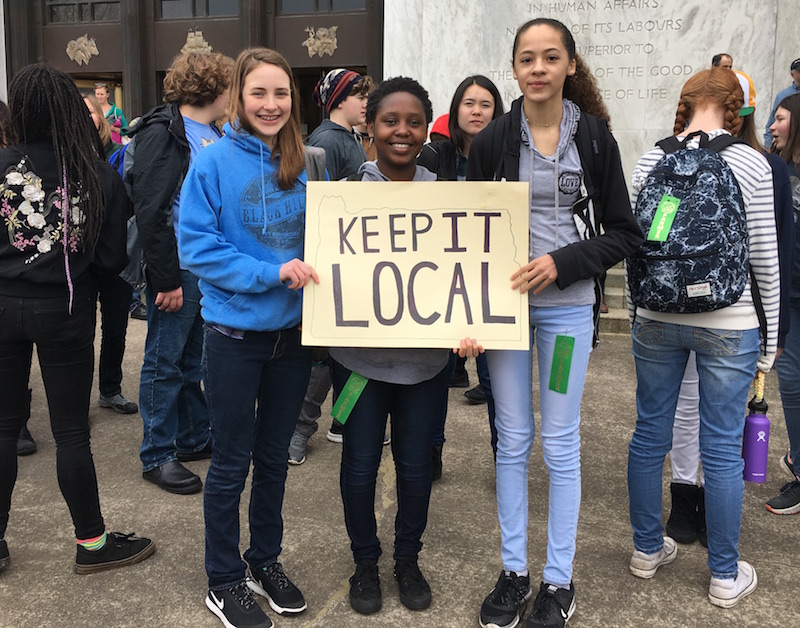 Showing up, and learning the power of collectively putting our bodies where our beliefs are, has meant that from local school boards to state legislatures to the halls of Congress, our representatives are now more…well…representative of everyone in our communities.

Part of putting our energy into making change together also means getting involved in issues we care about, and I'd highly recommend that if you care about where your food comes from and about the small family farmers who work every day to produce the food we put on our tables, then you should make every effort to get yourself and your families to Salem on Wednesday, March 27. Not only will you get to meet many of those family farmers and show them you've got their backs, you'll have an opportunity to participate in the democratic process by meeting with your representatives in the legislature and tell them how important good, clean food is to your family.

If you're wondering what the heck the legislature has to do with your food, just take a glance at the issues before the current session: a moratorium on the factory farm mega-dairies that are spewing unregulated toxic emissions into the state's air and groundwater; a ban on aerieal spraying of toxic pesticides; bills that will support beginning farmers and encourage retiring farmers to keep their farms in food production rather than selling them for development; and a ban on the use of bee-killing neonicotinoid pesticides that are at least partially to blame for the collapse of pollinators. And those are just a few of the dozens of bills under consideration.

If you've never set foot in the Oregon's Capitol building, it's high time you did. And what better reason than to support the farmers whose labor we all depend on multiple times a day? Get more info and sign up here, and you can sign up to join a carpool to the event from Bend, Grants Pass, Amity, Portland, Monmouth, Corvallis, Springfield and other communities around the state. You even get lunch in the deal!

All you have to do is show up. 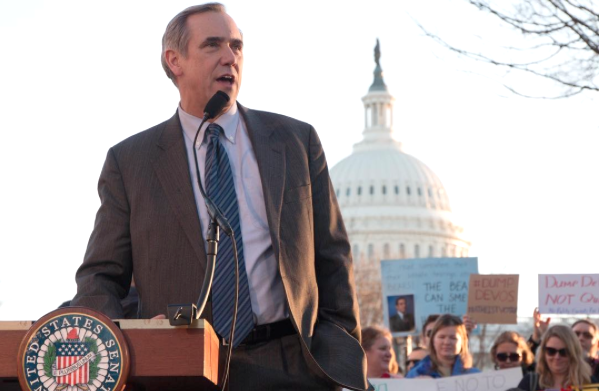 The Future of Our Food: Oregon Senator Jeff Merkley on GMOs, Climate Change and Citizen Action

This series interviews farmers, food activists, politicians and policy wonks to try to get a handle on the seismic shift in our local food landscape due to the change of administrations in Washington.

Elected to represent Oregon in the United States Senate in 2008, Jeff Merkley replaced conservative Republican Senator Gordon Smith in a hard-fought battle for the state's junior seat. The son of a millwright, he was born in the timber town of Myrtle Creek, Oregon, and was the first in his family to attend college, graduating with an undergraduate degree in International Relations from Stanford and a graduate degree in Public Policy at Princeton's Woodrow Wilson School of Public and International Affairs. After college Merkley worked as a national security analyst at the Pentagon and at the Congressional Budget Office, then returned to Oregon in 1991 to take a position as the executive director of Portland Habitat for Humanity. His work to provide housing for Oregonians led him to consider running for office, and he was elected to the Oregon House of Representatives in 1998, eventually becoming Speaker of the House. In his life outside of politics, he enjoys hiking and recently completed an IronMan event with his daughter. Impressive!

What are the critical issues affecting agriculture and our food system a) here in the Northwest and b) in the country as a whole?

GMO labeling gives consumers easy access to the information they need to make informed food purchasing decisions. There are Federal requirements for disclosing whether fish is farm-raised or wild-caught, or whether juice is from concentrate or fresh squeezed; the same should be true for genetically modified ingredients. After all, 64 other countries—including China—allow their consumers to know whether products contain GMOs.

I have been deeply immersed in this issue, and last year introduced the Biotechnology Food Labeling Uniformity Act, which would deliver a 50-state solution instead of a potentially complicated patchwork of GMO labeling laws. Major food companies like Campbell’s, General Mills, and Mars have listened to the nine out of 10 American who agree that GMOs should be labeled, and have taken steps to voluntarily disclose this information on their products. These companies are demonstrating that it is possible to give consumers the information they want without raising costs at the grocery store.

As a ranking member on the Agriculture and Rural Development Appropriations subcommittee, I’ve been advocating for consumers, and organic and small farms; traditional “big” crops like corn and soybeans are already well represented by lobbyists. I will continue to advocate for Oregon’s specific agricultural needs and consumers’ right to know what’s in their food.

The devastating effects of climate change are already being felt by food systems here in Oregon—baby oysters are dying as the ocean becomes more acidic; wildfire season is longer and more intense; prolonged drought is crippling farms and ranches. And yet we have a president who believes climate change is a hoax, and an Environmental Protection Agency chief who doesn’t think humans have contributed to global warming.

Since we can’t count on the current administration to act on climate, in the coming months I’ll introduce a “100-by-50” bill to achieve 100 percent clean and renewable energy by 2050. The would provide a roadmap to clean the electric grid, electrify transportation, and promote investments in new technologies to end the use of polluting fossil fuels.

The “100-by-50” framework is something every group or organization can sign onto: Commit to operating on 100 percent clean and renewable energy by 2050, and develop a framework for how you’ll get there incrementally. Every garden club, cooking class, and family can contribute to reducing carbon emissions and curbing the effects of climate change on our food systems.

What do we as citizens need to be paying attention to? What are the best sources for information on the issues?

There is a constant barrage of misinformation coming from the current administration. I suggest you identify a favorite traditional news source—one whose information is vetted and verified—to stay informed. Find an issue that you’re passionate about and get involved.

In your opinion, what’s the most effective action citizens can take in the short term? In the long term?

The grassroots uprising by ordinary Americans has had a real effect on Congress. As we go forward, the impact of citizen action is directly proportional to the amount of individual effort it takes. If you sign a petition or send a form e-mail, you’ll help spread the message. By making a phone call or writing a personal e-mail, your message will be a little louder. The biggest impact is showing up—to town halls, to rallies, to demonstrations. Seeing hundreds or thousands or hundreds of thousands of people coalesce around an issue effectively sends a message.

Read the other posts in this series.