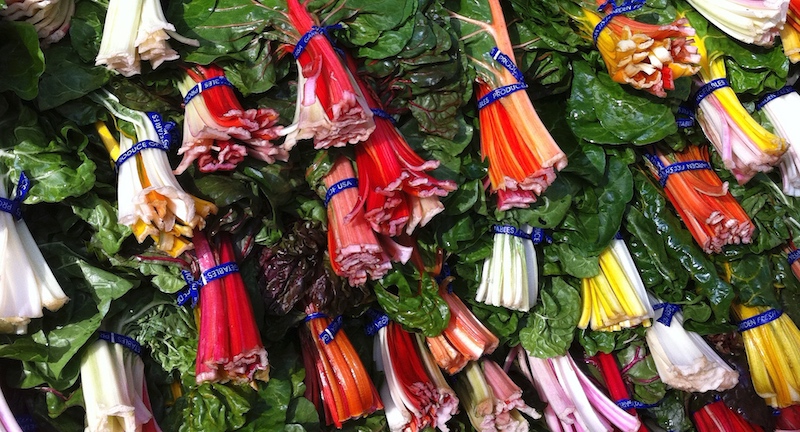 Celebrate Earth Day: Use Those Stems, Bones, Thinnings and Stalks

Today marks the 51st anniversary of the first Earth Day, held on April 22nd, 1970. It was created by Sen. Gaylord Nelson of Wisconsin, who was disturbed that an issue as important as the environment was not being addressed in politics or by the media at the time. An estimated 20 million people nationwide attended the festivities.

Today one of the most deadly crises facing our environment is climate change, and our increasingly industrialized global food system is rightfully blamed for its part in the disruptions we're experiencing. It's not just pollution from the pesticides used to grow crops, but the waste of limited natural resources like water and energy in these industrialized systems. Not to mention the damage from the methods used to extract those resources—fracking of natural gas, damming rivers and pumping oil, to name just a few.

Wasting the food we produce—estimates range up to as much as 40 percent, or 125 to 160 billion pounds of food—obviously wastes the resources and energy that went into producing those goods during production, processing, distribution, retail and consumption.

In Oregon, we're fortunate to have the bottle bill, passed in 1972 partly as a result of the environmental push that happened after the first Earth Day. The greater Portland area has a regular curbside compost and recycling system that keeps millions of tons of waste out of landfills.

But what can you and I do to help?

First, take advantage of those compost and recycling programs. If your area doesn't have them, work with your neighbors and start attending public meetings to advocate for them.  Run for office yourself, or help elect officials who will work to bring those services to your community. Above all, vote.

Second, and it may seem like small potatoes (Ha! Get it?) but think about your own consumption. Gardeners can make use of the young plants they thin from their garden plantings—radish greens, corn thinnings and lettuce starts are just a few—and home cooks can make stock from vegetable trimmings, chicken carcasses and meat, shellfish and fish bones. (Corn stock from corn cobs was a revelation, and I once got a bag full of chicken carcasses from a restaurant that was going to throw them out after pulling the meat off of them. Horrors!)

Chef Kevin Gibson garnished dishes at the late, lamented Evoe with colorful, pickled stalks of chard. And personally, I like to keep the stems on when I cook kale, chard and collard greens. I just chop the whole leaves and stems into half-inch strips and throw the stemmy ends into the hot oil and garlic for a minute or two ahead of the leaves—I think it gives more texture to the finished sauté.

And Happy Earth Day, however you choose to celebrate it!