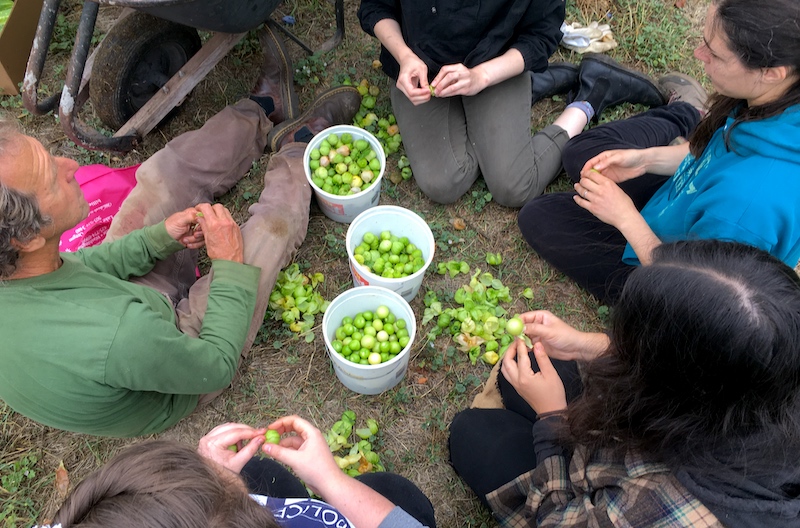 "It was mind-opening to hear others' opinions, perspectives and how passionate they were about them. I was inspired to see how beautiful everyone's cooking was and how sustainably it was done. To see that it CAN be done with effort and knowledge."
- Culinary student attending Quillisascut Farm School

In the far northeastern corner of Washington State, among the high desert pines populating the northern reaches of the Columbia River, Lora Lea and Rick Misterly have created a hands-on learning center where students spend a week immersed in a living example of what a local food system looks like. No lemons spark the salads; instead, the kitchen uses verjus made from the pressed juice of unripened grapes—the vines left from an abandoned attempt to make wine in the farm's early days. No branded items are allowed at the table, save for wine bottles (thank heavens).

I was invited to Quillisascut Farm to experience the program that now exposes dozens of students a year to small intensive workshops like Farm Culinary 101 (the workshop I attended), Edible Education, and Chefs of Color, among others. Each workshop has a particular focus, and most are aimed at professional chefs and culinary students, though serious cooks and those interested in building strong local food systems will find them perfectly approachable.

Lora Lea and Rick originally bought 26 hillside acres in the early 80s, intending to build a self-sufficient homestead where they could raise animals and have a garden to feed them throughout the year. She had grown up on a dairy farm in the area, so they started with both cows and goats, but Lora Lea was increasingly drawn to goats because of their intelligent and inquisitive natures. She also began making cheese from their milk.

They built a home with a cheese room and cellar for Lora Lea, and eventually added another 10 acres to the property. The couple marketed their cheeses to chefs in Seattle, Rick making the exhausting twelve-hour round trip deliveries. Several of their customers became interested in visiting the farm after hearing of their integrated approach to farming and making food from what they grew themselves. These customer visits and the inclusive approach the Misterlys took led them to start offering classes to culinary professionals, students and food writers. The visits prompted Rick to build a large straw-bale building that houses a professional kitchen, a large dining room, a living room for nightly gatherings and dorm rooms upstairs. (He also included a large double-wide barn entrance that farm equipment could access in case the school idea didn't work out.)

Conservation and use of resources is a key tenet of the curriculum at the school, and the very first workshop on the week's schedule was a demonstration of making the compost that enriches the soil that feeds the plants, animals and people who live there. It's a holistic approach that underlies everything at the farm, which depends on a well system for water—the bathroom mantra "if it's yellow, let it mellow" is drilled into students' heads—as well as the need to make use of every part of the plants and animals harvested.

A typical day at Quillisascut begins in the pre-dawn dark after a (very) quick cup of coffee made by the saintly staff who volunteer their time at these workshops—and fyi, that 5:45 start time was tough for this freelance writer. The morning session usually begins at the barn up the hill with anything from butchering a neighbor's heritage Karakul ram killed earlier that morning, to slaughtering and eviscerating several of the farm's chickens, to helping Lora Lea milk her goats.

After the early morning session, a large breakfast of farm-grown fruit and eggs, with breads made from grains milled onsite, is served buffet-style off the butcher block counter in the kitchen along with (thank the goddess once again) lots more (locally roasted) coffee. Each day has a "Word of the Day" theme—the first word was "Respect"—which students are encouraged to consider as they move through their assignments. The schedule moves swiftly from breakfast to classes on cheesemaking with Lora Lea, or a foraging walk with Chef Kären Jurgenson, or feeding and watering the pigs, chickens and goats. At least one morning is dedicated to harvesting whatever is in season in the garden (top photo), which will be pickled, cooked, baked or otherwise utilized in meals that week.

The hearty farm lunches are prepared by students, who are divided into four or five-person "teams" for the week, afte which classes continue apace with field trips to other area farms—John and Michelle Progar of Meadowlark Farm's innovative organic cropping system was fascinating—a presentation on bees and pollinators with beekeeper Steve Schott or bread baking with Chef Don Reed. After dinner is discussion and reflection on the day's activities led by Lora Lea, followed by well-earned sleep.

[Quillisascut] really created some sort of special bond.  Maybe it was the community that type of work creates, but on the last day, our final word was "grateful." It was a wonderful experience and one of those places your soul likes to stay for awhile even after you have left." - Professional chef attending Quillisascut Farm School

The farm school at Quillisascut has drawn participants from around the country, indeed from around the globe, but is primarily attended by students from Seattle-area culinary programs who compete for scholarships to the workshops. The school has become successful enough that it provides the bulk of the farm's income, and Lora Lea has cut back her milking goats to seven from a high of around 40, and they have found a distributor for the cheeses so that Rick no longer needs to make the long deliveries to Seattle.

Now in their mid-60s, the Misterlys believe that their primary mission is to spread the message about the hard work and care it takes to produce good food, with the intention that not just the education, but the interactions with the people and animals, as well as the quality and flavor of the sustainably grown food that students harvest, make and eat, will become an integral part of their lives as they move forward in their careers.

See more photos from my trip to Quillisascut Farm on my Instagram feed.