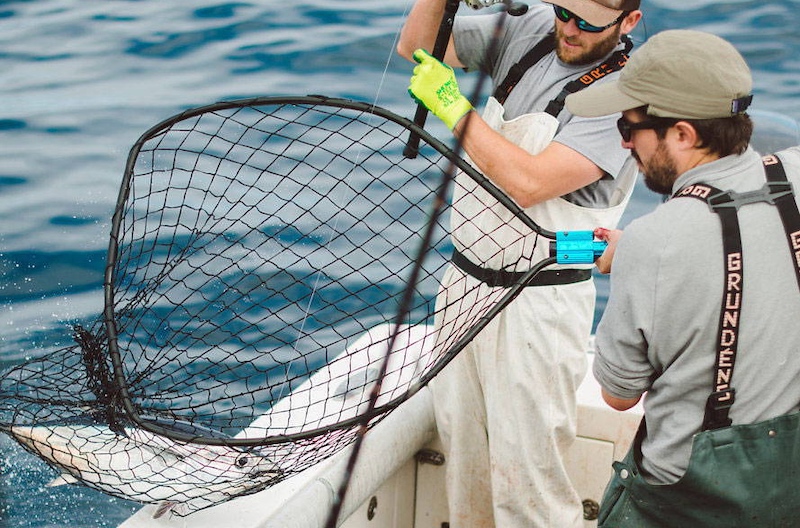 West Coast Albacore A to Z

With albacore season in full swing, it seems like a good time to rerun this post from 2011.

Wind off the ocean whipped through the rigging on his boat, and sea lions barked in the background as albacore tuna fisherman Rick Goché recalled growing up on Tillamook Bay on Oregon’s north coast.

“I’ve been fish crazy since I can remember,” he said. “When I was old enough to make my way down to the creek, I was fishing with a safety pin and a string. I can still remember when I got my first factory-made hook.”

Goché grew up to be a fisherman; today, he fishes the Pacific Northwest’s deep, abundant waters, casting off from Coos Bay for two to six weeks at a time. It’s hard work, and definitely not child’s play. “When you’re a hundred, 200, 300 miles offshore, it’s not like you can duck into a port when the weather gets bad,” he says.

His brother, Larry, fishes with him, and his son, his daughter, and his grandson have taken turns on the boat as well. He has hopes that his daughter Lauren, who will be working on the tuna boat this summer, may eventually take up fishing as a career.

The average age of a fishboat owner is 62 (Goché is 57—“I’m one of the young guys,” he says), and the industry has had trouble attracting younger people into a career that not only is dangerous but also requires hard physical labor and long periods away from home.

Another issue facing the industry is consumer awareness, a concern voiced by chef Eric Jenkins while he was handing out samples of hot-off-the-grill wild West Coast albacore outside a Portland-area Whole Foods market. “I’ve had a couple of people say they won’t eat fish because of the mercury,” he said.

The tuna most of us grew up eating in casseroles and sandwiches was probably skipjack, which is caught on giant factory ships that operate in the deep, tropical oceans of the world and is sold under brand names like StarKist, Bumblebee, and Chicken of the Sea. Nearly all of those ships are longline fisheries, which tow a fishing line several miles long with thousands of hooks baited at regular intervals along its length. The problem with this method is that it produces significant bycatch—meaning that it also hooks endangered and threatened sea turtles, seabirds, marine mammals, sharks, and other fish besides skipjack.

The tuna caught in these deep waters are several years old and can weigh 40 to 60 pounds. They have absorbed mercury and other toxins, enough to cause the Food and Drug Administration and the Environmental Protection Agency to advise pregnant women, nursing mothers, and young children to limit their intake of the fish.

Those warnings have caused big headaches for the West Coast albacore industry.

That’s because the advisories don’t distinguish between the albacore caught in the deeper oceans and those younger and smaller tuna caught off the West Coast of the United States and Canada. Ranging in age from three to five years old and weighing 12 to 25 pounds, these younger albacore simply have not spent enough time in the ocean environment to contain the levels of mercury found in the larger, older fish.

“We’re trying to get consumers to eat more of the local product,” Heikkila said. Approximately 16,000 to 23,000 tons of albacore are caught per year. “It’s crazy—we send 80% to 90% of it to other countries and then the U.S. consumer has to buy it from overseas. That money could go into local fishermen’s pockets.”

What’s more, Northwest consumers are generally unaware that these local fish are caught one at a time using what’s called a pole-and-line or troll-and-jig method. This approach employs 10 to 15 lines of nylon cord measuring six to 100 feet long that are towed behind a boat. Each line has a barbless “jig” or lure at the end that is attached to a double barbless hook. When a fish bites the jig, the fisherman hauls it by hand into the boat, allowing the fishermen to keep only “right-size” fish and eliminating bycatch.

The U.S. and Canadian albacore fisheries in the North Pacific, made up of mostly small, family-owned boats like Rick Goché’s, received a boost last year when Seafood Watch, a program of the Monterey Bay Aquarium that evaluates the ecological sustainability of wild-caught and farmed seafood, listed U.S. and Canadian troll- and pole-caught albacore from the North Pacific as a “Best Choice” due to negligible bycatch and the healthy stock of albacore in the region.

But the biggest shift in public awareness may come from the announcement by the Marine Stewardship Council (MSC), which has certified the Canadian Highly Migratory Species Foundation (CHMSF), an albacore fishery of Canadian-based boats, and the U.S.-based WFOA as sustainable and well-managed.

“It’s a very rigorous, on-site process that looks at a fishery as opposed to a sweeping view of a species,” said Kerry Coughlin, the Regional Director for the Americas of the MSC. “It’s our view that’s how you get a very rigorous assessment process that’s accurate, and it’s how, in some cases where fisheries aren’t sustainable, you’re going to bring about change on the water.”

And when they see the blue MSC label in their grocer’s seafood case or on a can of albacore, “consumers can have the assurance that it is an environmentally responsible choice,” Coughlin said. And, because they come from younger fish, the fresh loins of albacore available from July through October at most retailers contain more have more “puppy fat,” as an industry spokesperson called it.

“I think it’s moister,” Jenkins said. “It seems to have higher fat levels, particularly concentrated in the belly.” His suggestion to consumers buying a whole loin is to ask their butcher to keep the belly meat on, adding that many butchers either keep it for themselves even cut it out, which he considers a travesty.

Locally canned albacore would be almost as much of a shock to most shoppers. The major-brand tuna on their grocery shelves was caught and frozen at sea, then thawed at a cannery and cooked in big steamers, where it loses much of its natural juices and fats. It is then packed in cans and cooked again, requiring the addition of water or oil to keep it moist.

That contrasts with most local tuna, which is packed in cans when it’s fresh and cooked only once, sealing in the natural juices and not requiring the addition of oil or water to keep it moist.

Between MSC certification and a growing concern among consumers about where their food comes from, families that depend on the North Pacific albacore are seeing a brighter future for their children, and a way of life that they prize.

“On a boat, you have to have all your senses attuned to your boat and the fish and your gear, but what it comes down to is stay alive and fill up the boat,” said Rick Goché. “When I pull away from the dock and I cross the bar and I feel the ocean lifting the boat, I leave everything behind as much as possible. Sure, I miss my family, but I don’t miss all the complexities of being on land.”