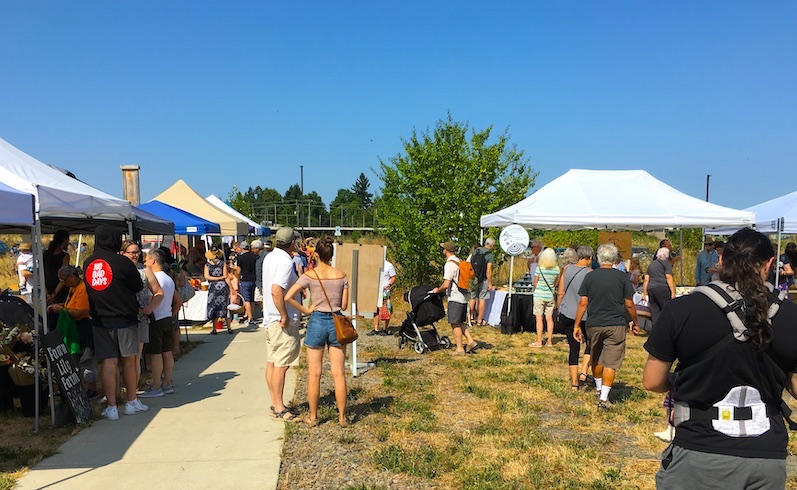 The Portland metro area has a wealth of farmers' markets stretching from suburban communities like Beaverton and Hillsboro to Gresham and Oregon City, with dozens scattered throughout the city itself. On almost every day of the week during harvest season there's a farmers' market brimming with local produce, meat, cheese and products made from the bounty of Oregon's fields, streams and oceans. Almost a dozen operate year-round, made possible by our mild maritime climate and farmers willing to adapt crops to cooler growing conditions, as well as educate shoppers about how to incorporate winter produce into their diets.

But not every neighborhood has equal access to these markets, which are generally located in the more central areas of the cities. So what do you do when you think your neighborhood would benefit from more access to fresh, local food but the nearest farmers' market is miles away?

In the case of the area near Rocky Butte—an extinct cinder cone near Northeast Broadway and 82nd Avenue, part of the Madison South, Roseway and Sumner neighborhoods—a group of neighbors started by surveying their community to gauge whether they would support a farmers market. When the survey came back with an overwhelmingly positive response, the group then spent two years working on strategy development and planning, which also involved finding a location and sponsors.

Discussions held with Portland market veterans and others who had been in the trenches for decades largely discouraged organizers, saying that the city was oversaturated with farmers' markets. Not to be put off, the new market's organizers argued that while there may be a saturation of markets in closer-in neighborhoods, communities in farther-flung areas were hungry for their own market that they could walk or bike to.

Organizers formed a steering committee, then implemented an innovative strategy to launch the Rocky Butte Farmers Market with two pop-up events at the height of the summer harvest in 2019. At the first, held in mid-July at the Dharma Rain Zen Center, it was an open question as to how many people, if any, would show up.

"Our opener blew our expectations completely out of the water," according to Hillary Barbour, one of the organizers and a resident of the neighborhood, as well as Director of Strategic Initiatives for Burgerville. "We had no idea if we would get 50 [shoppers], or 500. And we ended up with darn near close to 1,000." The relatively small number of vendors sold out of seasonal produce, pasture-raised chickens and farm fresh eggs.

Exit surveys from that first pop-up showed a strong demand for more seasonal produce and prepared food options. In response, the market team added almost double the number of vendors to the second pop-up, scheduled for August 3. It included several farmer vendors who are part of  the East Multnomah Soil and Water Conservation District’s Headwaters Farming Incubator program, as well as Mudbone Grown’s Pathways to Farming Incubator program. Student participants of Mad Roots, a youth-led sustainable agriculture program at nearby Madison High School, offered produce from the program's gardens. Vendors also came from many of the diverse populations in the neighborhood, including Latino, African-American, Vietnamese and Queer-owned businesses, among others.

"For many vendors these pop ups were their first farmers market experience," said Barbour. "We have long sensed that a new and emerging market in our neighborhoods—Madison South, Roseway, and Sumner—could be an important opportunity for new and beginning farmers who have neither the experience nor scale to enter a more mature metro-area farmers market. These two pop-ups appear to be confirming our theory."

Volunteers counted attendance at the second pop-up at more than 800 shoppers. These volunteers were key to both events, doing everything from distributing flyers to posting on social media to helping with set up, directing traffic at the event site, staffing and break down. Several came from the neighborhood branch of OnPoint credit union, which also supplied a $500 grant to cover some start-up costs. More support came from other nearby markets.

"I cannot say enough good things about the support we've received from other neighborhood markets [and] market managers," Barbour emphasized. "Especially Cully, which loaned us tables, chairs and canopies for both pop ups. Also the managers from the Hollywood and Montavilla markets were tremendously helpful and generous with their knowledge and experience. It's never felt competitive or discouraging" unlike, she added, the reaction from some of the larger markets in the area.

With the success of the pop-up events, organizers are committed to a series of regularly scheduled markets in the 2020 season. Fundraising is underway through a combination of grant requests, local business support, and a GoFundMe campaign, with one of the goals being to hire a part-time market manager for next season.

Another challenge facing organizers is finding a new site for the market, since the Dharma center is not able to host the market in 2020. But that challenge brings opportunity, according to Barbour.

"One thing to keep in mind about [the neighborhood] that's interesting is that the entire look and feel of Northeast 82nd between Siskiyou and I-84 is changing over the next three years," she said, citing a major upgrade scheduled for Glenhaven Park as well as the rebuilding of Madison High School. "The entire composition of our area is changing as more first-time homebuyers move in and houses turn over. I've lived in Roseway since 2004 and I feel like this year represents the second major wave of turnover I've seen."

Which means that a new farmers' market can be ground zero for this emerging area, a place to gather and build the community they want, based around supporting a vibrant local food system.