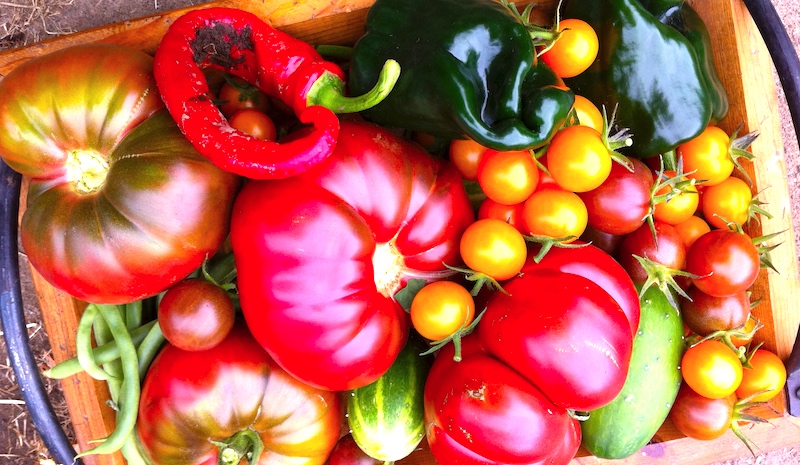 In Season: Hot Fun in the Summer Sun!

It may have been prescience that inspired me to check in with Josh Alsberg of Rubinette Produce to get the skinny on what to expect from local farms and producers in the coming weeks. After all, the wet, cool spring had delayed many of the region's spring crops and even flooded out whole fields of emerging vegetables on some farms, which then made it difficult to get tractors into the fields to replant, being as they got mired up to their axles in the saturated ground. Yikes!

According to Alsberg, it's meant the season for many fruits and vegetables is two to four weeks behind what we would consider normal—helloooo climate change. For instance, he pointed out that the three-week season for marionberries and boysenberries would usually peak around July 4th but this year they were hitting their stride on July 25th and will be done around the end of the month.

Stone fruit is experiencing a great summer, with peaches, apricots and nectarines pretty much on time and readily available—he said to expect peaches to be available through September. Alsberg said this year's gigantic blueberry harvest is "off the hook" and the flavor has been stellar, with local bloobs sticking around through the end of August. Despite a major area grower quitting the business, cherries have been relatively abundant, though you'll see them evaporating like a morning mist within a week or so.

Tomatoes, while also delayed, have been appearing and Alsberg is particularly excited about some new heirloom varieties like Marvel Stripe and Berkeley Tie-Dye (right), along with reliable standbys like Purple Cherokee, German Stripe and Brandywine. Look for sky-high stacks of summer squash—think zucchini, costata romanesco, crookneck and more—on farmers' market tables, along with cukes of all kinds for salads, hot and cold soups, pickles and lots more.

Local corn and peppers are already making an appearance—personally, I'm looking forward to making salsa verde and fermenting my own hot sauce again this year. Lettuces will be struggling in the heat, but brassicas like kales, cauliflower and broccoli are able to withstand a certain level of blistering summer temps. Alsberg said the bean crop, including string, bush, and pole, are looking good, and I'm excited to pick up both meaty romano beans and dragon's tongue shelling beans on my next trip to the market.

For those mourning the loss of Ayers Creek Farm and its famous Chester blackberries, Alsberg assures us there will be Chesters available from other local sources along with his personal favorite Triple Crown blackberries, so ask at your farmers' market. There are also local growers cultivating descendents of Ayers Creek's Astiana tomatoes—as Anthony and Carol did when they brought the original seeds here from Italy's Piedmont—though the new paste tomatoes may be appearing under a different alias. Again, always ask!