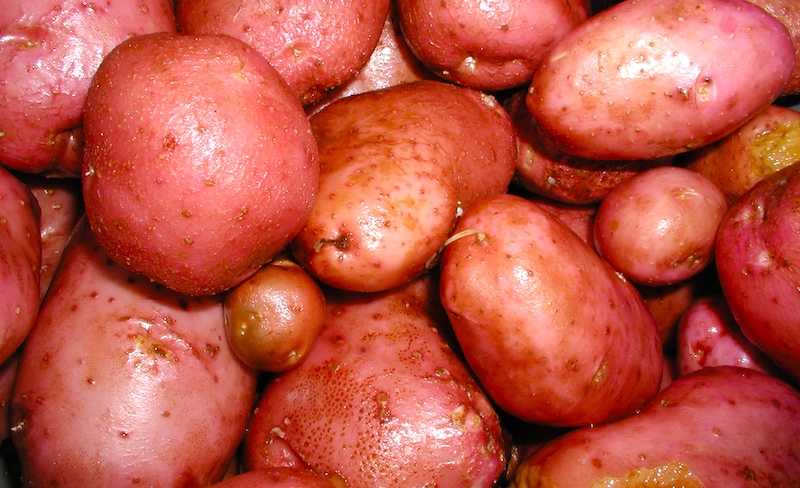 If you love potatoes like I do, you can do no better than to read the following appreciation from contributor Anthony Boutard of Ayers Creek Farm, who apparently wrote a treatise on the spud when he was a mere sprout. As mentioned, he and Carol only grow them for personal use, but they can be obtained for a short time at open farm days, one of which falls this weekend, December 14 and 15, from 2 pm to 5 pm. They are, indeed, worth the drive.

This summer, the Bonnotte made headlines as the world’s most expensive potato, apparently with some selling at auction for roughly $270 per pound. There is no good explanation for this high price other than there are some people with too much money. It is good that they share some of it with farmers. The potatoes are grown on Noirmoutier, a sandy island off the Atlantic coast of France where the farmers enrich their soil with seaweed. The entire crop is sold as new potatoes, before the tubers mature.

The report piqued my attention. My term paper for Biology 104, Plants and Human Affairs, was titled: "Of Things Algal in Nature, A look at the economically important algae of New England and the Maritime Provinces." One section was devoted to the use of seaweed as fodder and fertilizer. The coastal areas of these areas historically used seaweed as a manure; the proper term for a natural material used for the improvement of the land. They carefully gathered the wrack from the beaches and plowed it into the soil. Seaweed is rich in phyto-colloids which help retain moisture and nutrients.

The potato and other members of the nightshade family are heavy feeders and reward their cultivators' attention. You can throw every amendment on a turnip or a radish with slight effect. Lettuce and other greens are meager in their returns. The hungry spud, though, rises to the occasion.

Seaweeds provide the potatoes with a rich source of iodine, vanadium, iron, boron, copper, cobalt, zinc, molybdenum and manganese. These are trace minerals deficient or wholly absent in our washed-out soils, or the sandy soils of Noirmoutier for that matter. They wash out of the soil and into the ocean. So seaweeds and sea salt are means of closing the mineral loop. Consequently, we have always been generous with seaweed when preparing our potato bed.

The seaweed most commonly used in agriculture is Ascophyllum nodosum. Acadian Sea Plants, Nova Scotia, produces a high quality, easy-to-handle dried kelp meal that we use as a soil amendment. It is relatively expensive, around $90 for a 50-pound bag. Maxi-Crop Kelp Meal is harvested from the Norwegian kelp beds, and is roughly the same price. Maxi-Crop has a soluble form we use in our seedling production. We add 50 to 90 pounds to the potato bed.

The other soil amendment we use for the potatoes is a finely ground, mineral rich rock marketed as Azomite. It is from a deposit in Utah where a volcano erupted into an ocean. Once again, it provides a wide spectrum of the elements. We add about 100 pounds of this ground rock to the bed.

Are these ministrations worth the effort and money? It depends on how you regard the spud. If it is used as a cheap starchy substrate for cheese sauces, butter or sour cream, or for deep frying, certainly not. The potato’s flavor is not the point of the endeavor. Sort of like the modern varieties of popcorn that are specifically bred to confer no confounding flavor in the kettle mix. If you are preparing a simple potage bonne femme, leek and potato soup, as we did for the staff at Sweet Creek Foods this Tuesday, a fragrant, flavorful potato is essential. The better the potato, the better the soup. A large pot disappeared in short order. As garnishes, we included freshly grated horseradish, ground cayenne and finely minced speck from the Alto Adige.

We don’t grow potatoes commercially; they are for our own table. Just not worth explaining the difference in price for a carefully grown potato. When we have extras, as we do this year, we sell them at the open days. Though it is comforting to know that in France, quelle suprise, they are esteemed enough to grow carefully, and the farmer is rewarded for the effort. We must admit, a tinge of envy, too.