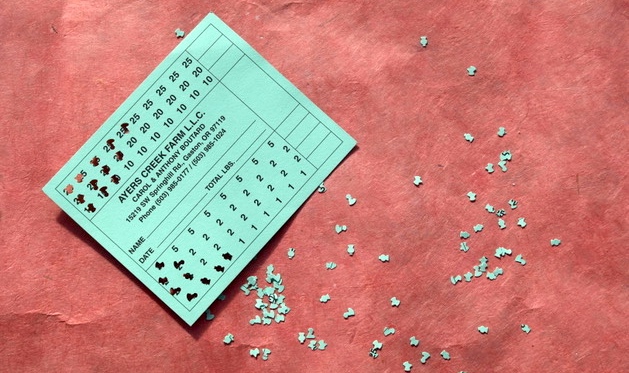 Farming involves developing systems that work for both the land and the people who labor on it. Contributor Anthony Boutard of Ayers Creek Farm reviews one such sytem.

Between 1999 and 2007, the staff at Ayers Creek Farm harvested about 200,000 pounds of Chester blackberries annually and we sold them to Small Planet Foods. The company packed the blackberries under their Cascadian Farms label. At the time, our 10-acre planting accounted for about 15 percent of the nation’s organic blackberry production—reflecting the weak state of organic fruit production and demand at the time, rather than an indicator of our prowess as growers. Nonetheless, my mother enjoyed being able to buy our berries from her local store in upstate New York.

A few years into the venture, mother left an indignant message on our answering machine complaining about a drop in our quality—she found the berries seedy and not so sweet. I returned the call and asked her to read to me the “country of origin.” Demand for organic blackberries had by then outstripped our production and supply gaps were filled in with organic ‘Brazos' blackberries from Chile. After that, she checked the label before buying. As New Seasons Markets expanded and immigration restrictions threatened to sap our access to labor, we shifted to fresh market production and bid an amicable farewell to Cascadian.

The currency of the field during the Cascadian Farms years was the punch card, a 3.5-inch by 4.5-inch piece of colored card stock. Common to every farm that picked fruit by hand, it was used to tally the day's wages and establish the price paid to harvest the berries. A few weeks before our first harvest, we visited the offices of the now-defunct Hillsboro Argus, the local newspaper which printed these cards for farmers. The standard card had three rows of numbers on top and four on the bottom, and a space in the middle for the farm’s name and address, the person’s name, and the date. Following the advice of the printer, our cards had a row each of 25, 20, and 10 at the top, and a row of five, two rows of two and one row of one. He also recommended three different colors of stock—yellow, red and green to allow a change in the price per pound paid without engendering confusion.

Punch cards need punches. The printer opened a drawer of neatly arrayed green boxes, each containing a uniquely designed punch. Commercial punches are precision tools made from heavy, polished stainless steel, fitting comfortably in the hand with no rough edges to raise a blister at the end of the day. Nor did they leave hanging chads; a term that would slip into the vernacular a couple of years later. They were $100 each.

The printer recommended that we look for shapes that would be hard to duplicate. He regaled us with tales of industrious people who used a file to shape a counterfeit a punch from a nail, or painstakingly cut out punch marks with a knife. He recommended a pattern with a combination of curved and straight lines. We selected three which became known as the bat, sweepy lady and the fireplug.  I had the bat and weighed fruit at the center of the field, Carol had sweepy lady and tallied fruit at the north or south edges. Zenón and the fireplug would fill in where an additional tallier was needed. A punch and a card created money, so the punch was always secured to our belt with a bright pink cord.

Each day we harvested, a new card was started with the date written on it. Regardless of the price per pound paid, all staff had to earn minimum wage. People picked at different rates and level of quality, much as typists vary in the number of words per minute and accuracy. On a given day, the tallies might vary between 150 and 350 pounds. There was no correlation between age or gender, it was just a matter of how the eyes and fingers worked in union. Leticia, a 20-year-old woman and Gregorio, an 80-year-old man, were the fastest workers, both pulling in 350 pounds or so in the course of six hours.

On Saturdays, we set out a box of envelopes and staff placed the cards inside an envelope. We spent the better part of Sunday sitting at the kitchen table tallying the cards and preparing payroll. On occasion, someone would lose a card. We would ask them how many pounds were punched on the card. We would write that number on a card, indicating that it was a replacement, and it would go into the envelope. We also had a policy of paying on cards even if they were handed to us a year later. As currency, the cards were occasionally reassigned. For example, a cousin had to return to California and would not be there to cash the check.

We kept a calendar with the starting and ending times for the day’s harvest, and calculated the number of pounds harvested that would meet minimum wage at the posted price. The rule of thumb was that if more than 20 percent of the people were picking at a rate below the minimum wage, it was time to increase the posted price. When the posted price changed, the color of the card changed. By the time we made the second change, the end of the season was nigh. Typically, the first half of the crop was easiest to harvest, the next quarter was slower and we would raise the price by five cents, and the final quarter was much slower, and the price would increase by another 10 to 15 cents.

Generally, the Chesters were considered a good day’s work. But if another farm had a field of pickling cucumbers ready, we would lose the strongest and fastest young men who could make more money in that field. We lost the same group when the vineyards started harvesting grapes. Where brawn was rewarded over dexterity, we lost the strongest staff members. By that time, the Chesters were pretty much finished, though.

The most fraught moment in the field is during the tally. The mood could devolve quickly, leading to confusion and unnecessary upset. We had a rule that no one could talk to the tallier or to the person whose fruit we were weighing. If there was any distraction or commotion, we would stop, step back, and wait until things settled down, in much the same way as a pitcher steps off the mound to gather control of the moment. As the fruit was weighed, the number of pounds was called out and the person handed the tallier the card. The face of the card had to be clearly visible to all while it was punched, and then returned so the person could confirm the amount punched. Comity in the field was precious. It was protected by a predictable choreography and organization.

Computers have supplanted the punch card. We cling to the beautiful steel punches as a beautifully-crafted artifact of our history as berry growers. The punch card was a simple, intuitive and tactile form of communicating the day’s wages.