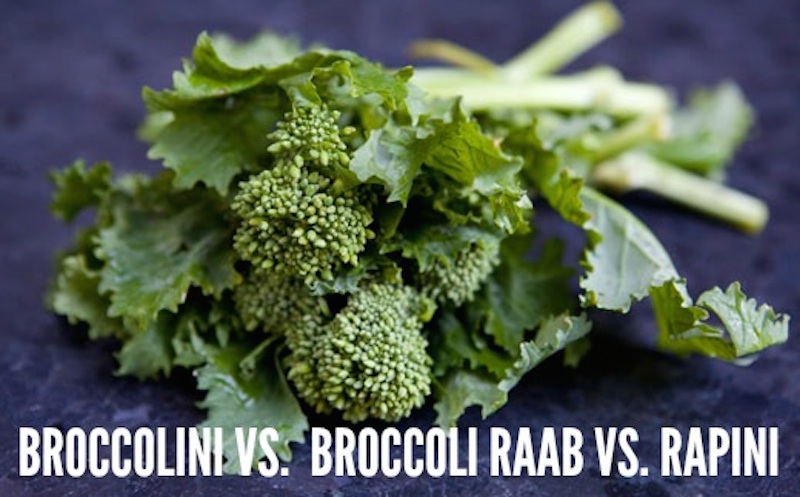 Since I'm jonesing for some lively greens and saw kale starting to flower in my neighbor Bill's garden, I thought this post from market master Ginger Rapport of the Beaverton Farmers Market would be great to keep on hand for market shoppers who might be asking, "What are those bundles of greens and why are they all called something different?"

Do you get confused when you hear the words “rabe,””raab,” “rapini” or “broccolini” used in recipes? Let us help you sort this out because you will find tons of these green vegetables in the market very soon.

First, a little taxonomy: Cruciferous vegetables are vegetables of the family Brassicacae, known as Brassicas or Crucifers. They include: cauliflower, broccoli, mustard greens, arugula, bok choy, kales and cabbages to name a few. Now, a little clarification:

While each of these are from a common family there are slight differences in taste between them. With each, you are meant to eat the stems, buds and leaves, making them very easy to prep for cooking. Don’t be alarmed if the buds have begun to show their yellow flowers. Some feel that the flowers are a sweeter version of the parent plant.

All of the aforementioned brassicas are excellent roasted, sautéed or lightly steamed. We don’t recommend boiling because it is easy to overcook the leaves in boiling water. The usual additions of garlic and a pinch of red pepper flakes makes for an easy and delicious preparation. Finish your dish with salt and pepper to taste and a squeeze of fresh lemon juice.

We also suggest that you try tossing your raabs with a balsamic vinegar reduction. The reduction’s sweet finish balances the bitter quality of the greens. We like to keep a balsamic reduction in the refrigerator to have on hand as needed. It is delicious drizzled on salads, fresh vegetables, fish and meats.

Boil in a small saucepan until reduced by half (one cup). You can continue to boil for a thicker glaze type consistency. You may add a clove of garlic, minced, or fresh herbs such as thyme. Be sure to strain those out before storing.

* Note: Bottles of balsamic vinegar on store shelves labeled "Balsamic Vinegar of Modena" are a commercial grade product made of wine vinegar with the addition of coloring, caramel and sometimes thickeners like guar gum or cornflour. Authentic balsamic vinegar, labeled "Aceto Balsamico Tradizionale di Modena," is produced from the juice of just-harvested white grapes (typically, Trebbiano grapes) boiled down to approximately 30% of the original volume to create a concentrate or must, which is then fermented in a slow aging process which concentrates the flavors. 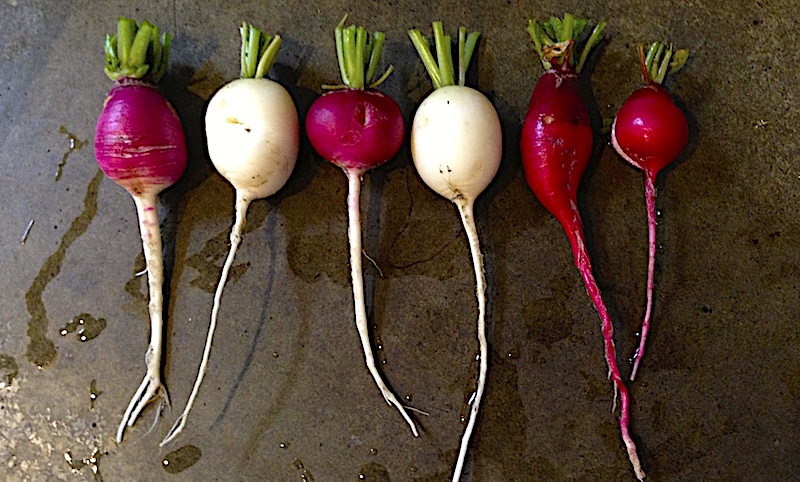 In Season: Despite the News, Spring is Here with Much to Look Forward To

The world has changed. Things are different, and scary, too, certainly more so than at any time in my life. Which is why I'm clinging tightly to those things I can count on, that are beautiful, that are constant. 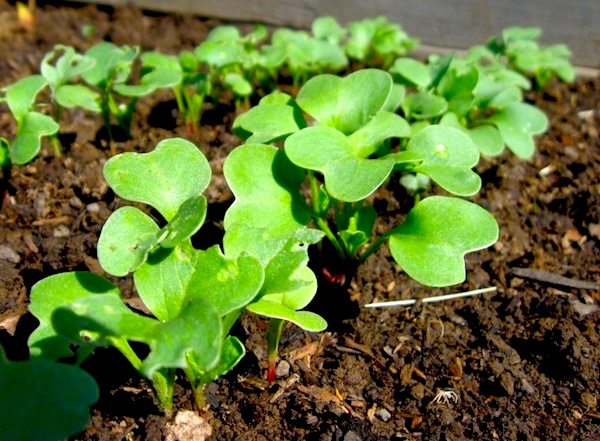 Spring is definitely one of them. Flowers blooming, trees leafing out, good things to eat emerging from the ground and beginning to come in from local farms. Which is why I wanted to check in with Josh Alsberg at Rubinette Produce to get an update on spring at this particularly strange time in our world.

"The whole point is, how can we support local farmers and keep people safe?" he said when I asked what he was focused on. He said that buying at farmers' markets and from greengrocers like Rubinette, which get most of their produce directly from farmers, is the best way to keep our local food system strong. Now is a particularly critical time because a number of area farms depended on restaurants, many of which are now closed, for at least a portion of their sales. Buying direct also means that your food is going through fewer hands. At supermarkets, food is packed at the farm, shipped, warehoused, shipped again, then unpacked at the store and stocked by store staff. 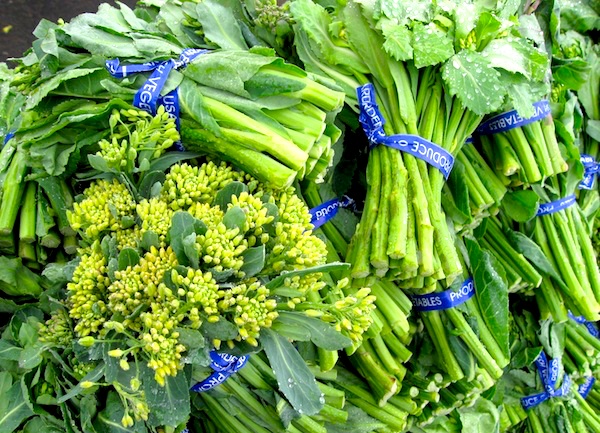 Alsberg also suggested that getting a CSA share from one of our outstanding local farms is a good way to get the freshest seasonal produce, support farms and reduce handling issues. (Go to the Portland Area CSA Coalition for a list of local farms and what they offer to subscribers.)

And what is that seasonal produce, right here, right now?

Alsberg said we're almost at the end of the season for raab, rabe or rapini or, if you're botanically inclined, "the inflorescence of plants" (above right). Personally some of my favorite spring greens, for a short time you should still be able to find the sprouts of bok choy, brussels sprouts, cabbage, kale, kale sprouts, mizuna, red choy, spigarello, tatsoi and turnips, among others. 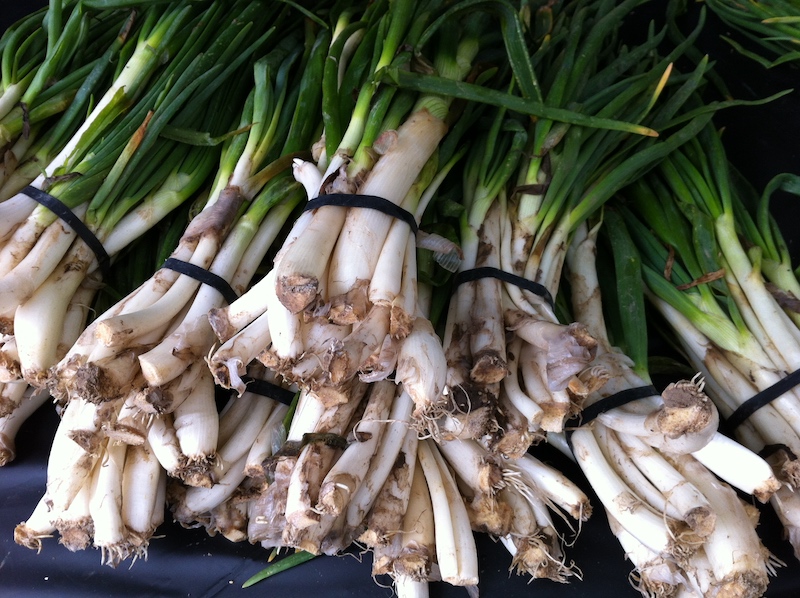 All of the alliums and wild onions, as well as green garlic, spring onions and the Spanish type called calçots (left)—meant to be grilled and served with a romesco-like sauce called salbitxada—are beginning their season. You'll also find local fiddleheads from Southern Oregon available, along with ramps, which don't appreciate our Pacific Northwest maritime climate, imported from the part of the country that Oregonians call "Back East" (basically anywhere east of the Rockies).

Heads of local cabbage are rolling in, too, as well as a regrowth of winter greens like chard, mizuna (below right), tatsoi and winter arugula. There are root vegetables kicking around, including shallots, storage onions, potatoes and leeks, but Alsberg said that with the warm spring weather we've been having, early spring roots like radishes and spring turnips are beginning to appear, along with fresh herbs like parsley, cilantro, sorrel, chervil, mint and chives. (Looking at my garden, tarragon and lovage won't be far behind.) And don't forget chive flowers—I'm excited to make a bigger batch of stunningly pink chive vinegar! 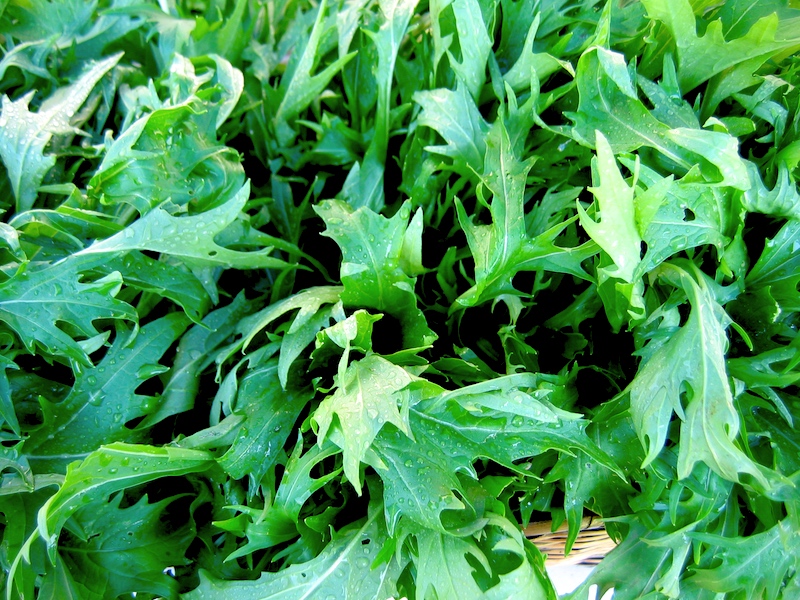 And for nutrient-dense greens, you can't do better than hearty spring greens like arugula, dandelion greens, spinach and early lettuces so fresh they practically vibrate.

Oh, you want to know when strawberries will arrive?

Alsberg says that though the season is running three or four weeks ahead of last year, you'll need to hold your horses until mid-April when Albions will begin appearing. Incidentally, Alsberg assures us that strawberries will be abundant by Mother's Day this year. 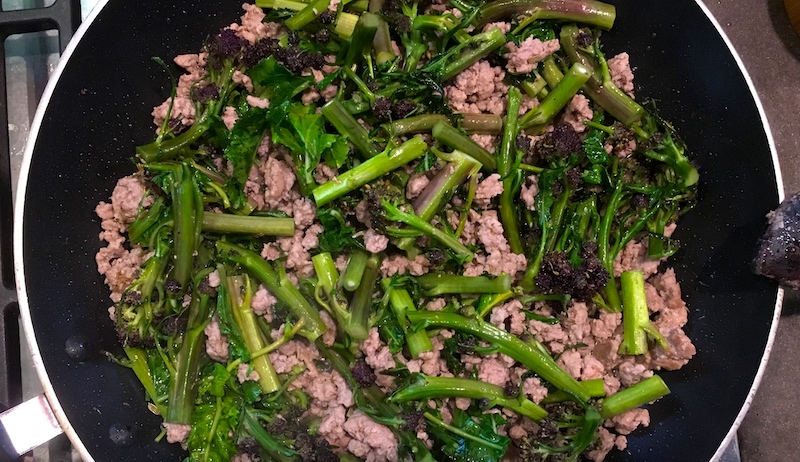 This time of year, when tender spring greens are bursting with flavor, the best meals are often the simplest. I agree with contributor Jim Dixon of Real Good Food that the combination of the inflorescences of various brassicas are fabulous combined with a good pasta (fresh or dried) and pork (fresh or cured).

It's officially spring and we can't seem to leave the farmers' market without bundles of "spring raabs." Whatever you call them, we love to eat them.

Rapini and pork make a delicious combination—served over pasta it is a classic southern Italian dish.

The slightly bitter turnip greens are also called brocolli raab, cima de rape (head of the turnip), brocolli di rapa, or rape, and they're members of the Brassica family of cabbage cousins. 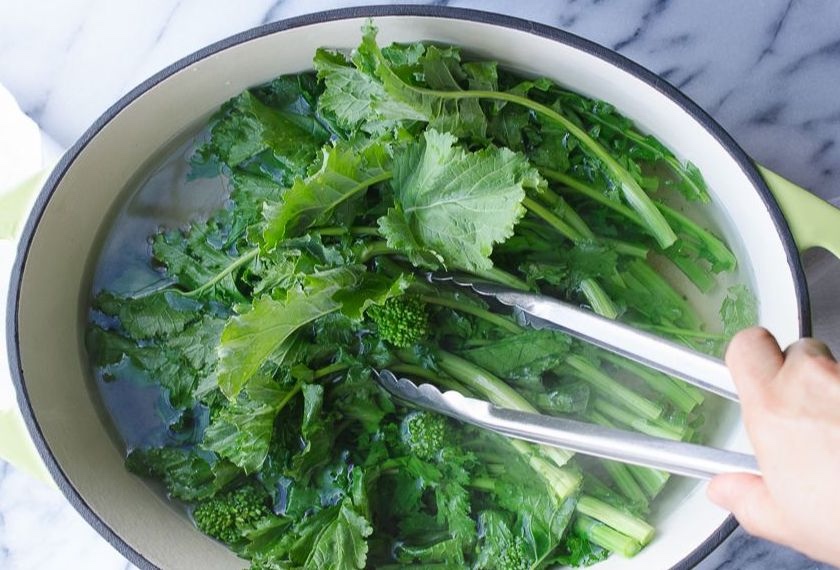 A quick bath mellows the bitter tang of rapini, and then it’s dragged around a skillet in plenty of olive oil and garlic. [If you like that bitter tang, like I do, omit the next step, chop them and go straight to the skillet after washing. - KB]

First, cook the rapini in well-salted boiling water for about 4 minutes; fish it out with tongs and let cool in a bowl.

Cut the rapini stems and flowers into pieces about 2 inches long, add them to a skillet (with the water clinging to them) with extra virgin olive oil and a few cloves of chopped garlic, and cook for about 5 more minutes.

Put the cooked rapini in a bowl and set aside. 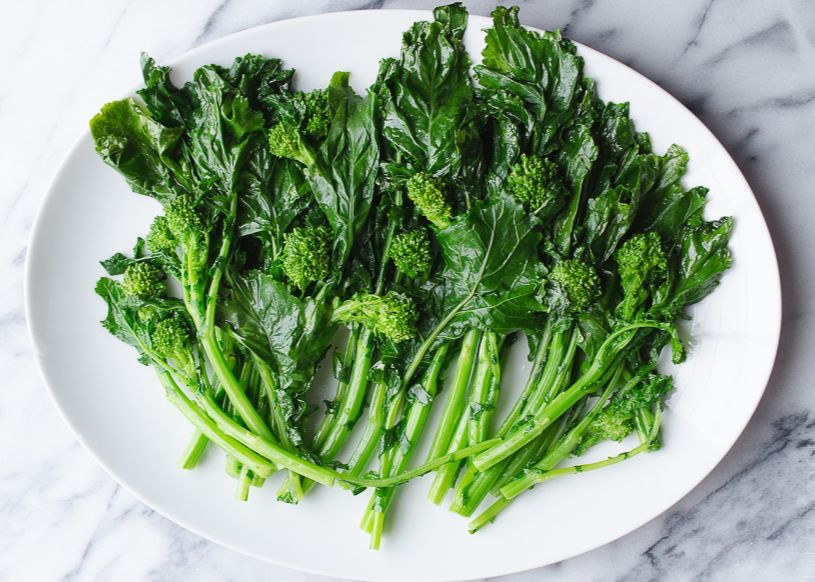 Use the same skillet to cook a pound of ground pork with some olive oil over high heat until browned, then add a good pinch of oregano, another of fennel pollen, a teaspoon of fennel seeds, and a good pinch of sea salt. Stir in the cooked rapini and turn off the heat while the pasta cooks.

For 4 servings, cook a half pound of pasta in salted boiling water for about 12 minutes [I'd normally use a full pound of dried pasta for four servings, but we're hungry folks. - KB], Using a slotted spoon or small sieve, scoop the pasta into the skillet with the pork and greens; add a big spoonful of the pasta water and cook everything together for a couple of minutes. I like to serve this with a drizzle of good olive oil, some grated Parmigiano Reggiano or Pecorino Romano, and a pinch of flor de sal with piri piri chile. [Red pepper flakes or other ground hot peppers like cayenne are also great. - KB]