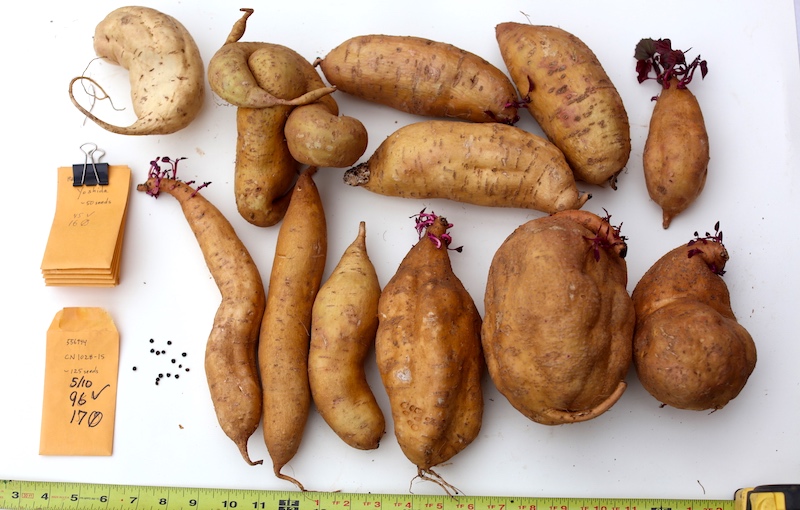 Farm Bulletin: Propagating a Tropical Fruit in a Less-Than-Tropical Climate

Contributor Anthony Boutard of Ayers Creek Farm in Gaston, Oregon, is always up for a challenge when it comes to adapting his favorite foodstuffs to our maritime climate.

Sweet potatoes are propagated as clones; shoots are cut from the tuber and rooted. Those slips are genetically identical to the tuber, absent a mutation, and assure the next crop will have a similar look, flavor and texture. The curse of uniformity is that life, at least for some of us, becomes very dull indeed when everything looks and tastes the same.

For diversity, the farmer must rely on sexual reproduction which leads to a reordering of the crop’s genome. As a tropical crop, the floral biology of the sweet potato is poorly adapted to our latitude and climate, actually completely worthless, at least in terms of reproduction. Sometimes they will flower, a lovely flower at that, but seed set is beyond their capabilities. Consequently, breeders must work their magic in subtropical and tropical locations.

In 2016, knowing our interest and experience in growing sweet potatoes in Oregon, Jay Bost of GoFarm Hawaii and John Hart of EarthWork Seeds approached us to see if we would plant some of their seeds they harvested from their breeding work on Hawaii. We were game, so they sent us some packages. The seeds are tiny and the instructions advised that the hard seed coat had to be nicked, then the seed soaked to assess viability. If the seed started to germinate we could plant it. Following this difficult protocol, Carol managed to start 250 plants and these were planted in the field.

That autumn, we pulled the plants and identified just five out of the 250 that had potential in this climate, and we weren’t especially fussy. Most failed to produce any tubers, those that did have swollen roots produced mere rat-tails as they are termed, about as plump as a pencil. A similar phenomenon occurs with tropical races of corn, the stalks grow and grow and grow and grow and grow, as though reaching for the moon, with nary an ear maturing by the time our frost falls. The difference with this breeding effort is that the breeders specifically selected parents with potential to produce tubers at this latitude. Even so, nature maintains the house odds. Bost and Hart were gambling against the tropical nature of the crop and only beat the house two percent of the time. On par with Las Vegas casinos or the state lotteries; actually not so bad when you think of it with that perspective.

Of the five successful plants from the 2016 planting, all were white-fleshed and tawny-skinned. Although we continued to propagate the other sweet potato varieties in our stable, by this year it was apparent that only one of the old guard remained, the obnoxiously named "White Delight" (top photo, upper left), and only a handful of tubers at that. The Bost and Hart sorts had swamped our genetic stable with their vigor and contentment in our climate. As far as I can tell, three sorts dominate. On the left, there is the long, smooth-skinned tuber with few lateral root scars. The second, at the top, is plumper with many more scars and a furrowed shape. The third is very large, distinctly furrowed, rotund, with a scurfy skin. Aside from appearance, they all have good flavor and pleasant sugar levels.

We will add that this year was a stellar sweet potato moment—an unstintingly hot and long growing season. Enjoy them. Oh yes, as someone who frets at stupid variety names, these tubers are, as yet, unnamed. Oh glorious anonimity! If you must name them, "The Bost & Hart Seedling Grex" is the correct way to refer to these tubers. "No Name Yet" also works just fine, and is just as smart.

Last year, the New York Times had an article about the quest for quality sweet potatoes, or yams as is your wont. The lesson being, forget those in the grocery store. That is precisely why we grow our own. 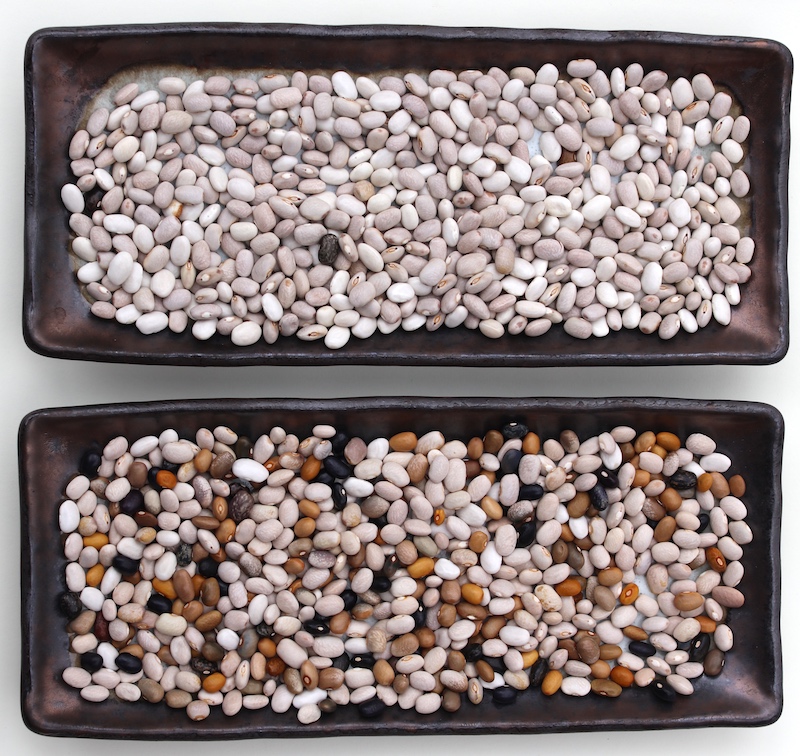 Contributor Anthony Boutard writes: "Here is a note I prepared regarding Otello’s [Pebbles, one of the dried beans Anthony grows at Ayers Creek Farm]. On my restaurant availability list, I usually include a 'photo of the moment' followed by a note placing it in context. One week I didn’t have time to comb my photo files and draft a note, so I simply stated that due to a lack of a sponsor, there was no photo. That led to a series of fictitious sponsors."

In 2015, we were sent an irritatingly small package of beans by Nancy Jenkins, a food writer and olive oil maker. People often leave kittens and cats at farms assuming they will be cared for in some unspecified way; mostly and fittingly, the caregivers are the farm’s coyotes or bald eagles always looking for a meal more exotic than the usual fare of mice and voles.

Likewise, small packages of pretty beans are sent or given to us in the hopes that we will become their genetic stewards. Sometimes, an endearing note explains that the beans are a family heirloom and were found in a late aunt’s garage where they had been stored for five years in a mason jar. As a further tug on the heartstrings, and doubling down on their pedigree, a charming name is given to them. A name in a tongue from the old country amps up the hype. Somehow, sending them to us assuages the custodian’s guilt of not carrying on the family tradition themselves. Despite claims made by various wags about sacred beans found in some ancient granary, garden beans are viable for about two years, after that their vitality drops off the cliff. Such claims are just as likely as the old temple cat that is still haunting the pyramid some 5,000 years later.

The package in question had a note, written by another person in the chain of stewardship. It noted that the bean was grown by someone called Otello who died early and had praised the bean as growing well in poor soil. Not much of an endorsement, and not a word about its culinary qualities. Worse, the package contained what appeared to be an assortment of types, something bean growers work hard to avoid. The custodian’s tag noted they were named "Fagioli bianci • grigi," again no first-hand endorsement of their culinary merit.

The package would have been relegated to the ACF seed museum (i.e. compost) except that Myrtha Zierock [an intern at the farm that year] and I were planting a block of soy and had space for a few more seeds. Some beans are promiscuous and will contaminate a field of a carefully managed commercial crop. Soy and garden beans do not cross pollinate so there was not harm in filling out the row. We joked that the beans looked like little pebbles and tossed them into the seeder. At harvest, we cooked up the beans and found they had their redeeming qualities. Because of their appearance, we named them Otello’s Pebbles.

In preparing for the 2020 harvest, we went out to select the 2021 seed crop and discovered the beans had drifted away from the original beguiling mix that prompted our impulsive sowing, and were now almost entirely white or light gray. The translation of Otello’s name for them was "beans white • grey", so they were probably closer to his beans than the “pebbles” passed on from their custodian—those we received in the mail. We combed the field looking for every plant that produced something other than white and light grey. In the lower dish (top photo), you can see the restored variation which is close to those in the seed package Jenkins sent to us.

Does it matter? I think so. We grow many carefully managed beans, but for a bean suited to the stew pot, a bit of a topsy-turvy mix of flavors and textures make for a far more interesting ingredient. I assumed that the genetically chaotic mix would take care of itself, but I was wrong. We have to be just as diligent in our pebbled seed selection as we are with zolfino, for example. It is a bit more of a challenge because we need to make sure we have a full and balanced selection of the original colors, as opposed to selecting for just one color.

We have tried the new selection on the plate and last September’s work was worth the effort. The restructured variety is head-and-shoulders better flavored than the "white • grey" mix corresponding to Otello’s original bean. Frankly, it is no wonder Otello failed to rhapsodize over their quality. Indeed, it is now up there with the all of our other beans, even better than that first harvest that caught our attention. If you think Italian makes the bean sound sexier, then call it sassolini di Otello delivered in the style of Keven Kline, all the same to me. But be sure to try them. You won’t regret heeding the farmer’s suggestion.

* In an exchange about the label (above), Anthony clarified that, alas, the farmer is not Otello: "Otello was long dead when I received the beans. The Otello's block is influenced by the simple, bold renderings of the early 20th Century Mexican woodblock prints, particularly those of María Izquierdo and David Alfaro Sigueiros."