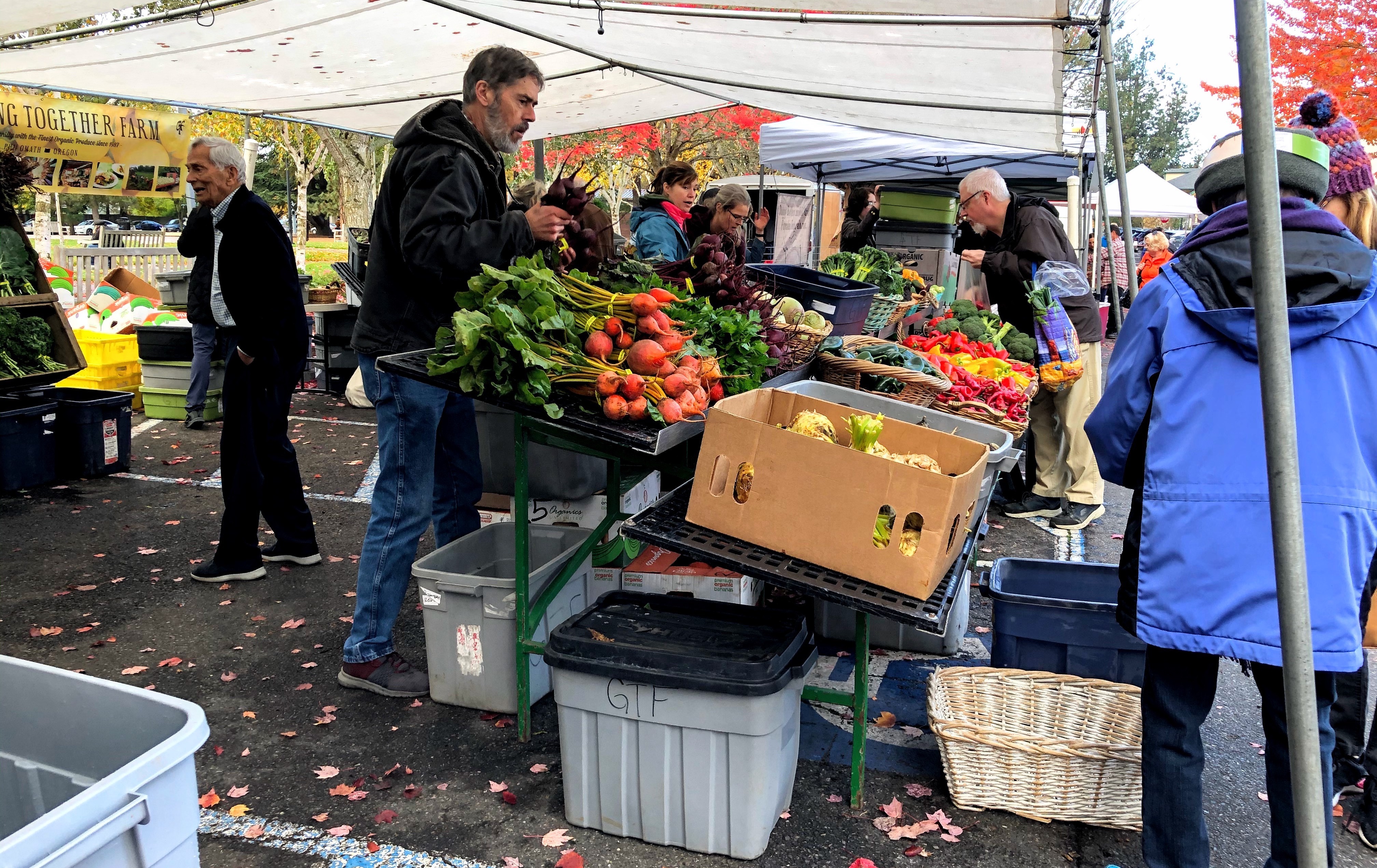 I've been covering farmers' markets in the Northwest for more than a decade, starting with my weekly Market Watch column in the Oregonian's FoodDay to regular posts right here on Good Stuff NW about what's coming in from our region's fields and forests. One thing that's always impressed me about our market scene is the sense of community that exists not just between farmers and their customers in the market, but among the farmers and vendors themselves. This month's Beaverton Farmers Market newsletter brought that to mind again, and I thought I'd share with you market manager Ginger Rapport's reflections on that topic.

Our mission at Beaverton Farmers Market has always been to cultivate community. Yes, we believe that bringing fresh local foods to the Beaverton community is a large part of our mission, but without building strong relationships with community members, vendors and farmers we cannot succeed in delivering the other. We believe that’s what keeps you coming back to the market even more than the growing number of fresh food choices you can choose from (we’re very fortunate to live in an area that has many). We foster community.

This past weekend proved that we have been successful in our efforts, as the community came together to help one another out. Long before shoppers hit the market our crew and vendors are busy setting up in the early hours of the day. While the market may open at 9 a.m. in the fall, our staff and vendors are already on site at about 6 a.m. preparing for the day. Last Saturday began when one of our vendors had the misfortune of having her car break down in the market. After vendors and market staff moved her car out of the way in the market, Ron Lilienthal of More-Bees, sprang into action to troubleshoot his neighbor’s car. He didn’t want her to be stranded once the market was over. Being the handy guy that he is, he borrowed some tools from the market, ran out for a part and was able to make repairs so that she could leave the market at the end of the day.

Early in the day on our staff had received word from both Denison Farms and Gathering Together Farm that they were stuck in standstill traffic on Interstate 5 North with all lanes blocked. Sadly, there was a multiple car accident with injuries and a fatality. We were saddened by the news, but grateful that our vendors were safe, just delayed. Both vendors were able to make it to the market some time after opening. Once the farms arrived, the Beaverton Farmers Market really rose to the occasion—vendors, market staff, and even customers chipped in first to unload Denison Farms’ truck. After Denison Farms was set up, Tom Denison came over to help pitch in at Gathering Together to get their booth set up as well. Customers, employees, market staff and other vendors were stocking produce in baskets and unloading boxes and pallets. We appreciated the patience of our customers and the camaraderie of our community as we worked through the rocky start.

We like to think of our market as a microcosm of a small town—some days are rougher than others, but we’re all working together to make this market the best it can be: a place to gather with neighbors, new and old alike, providing fresh local food and relationships. 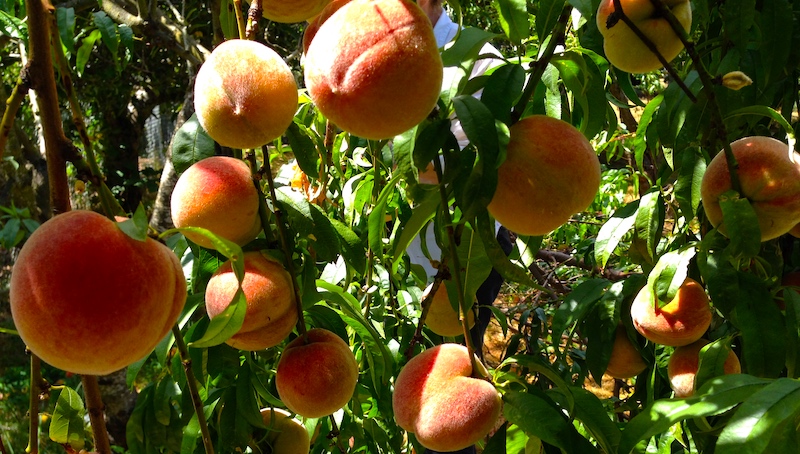 Ginger Rapport's newsletters for the Beaverton Farmers Market are worth getting for the information and recipes she shares (click here to subscribe). Her deep knowledge of produce shines through, helped by her passion for cooking and education. Here she talks about the luscious Northwest peaches and nectarines tumbling into midsummer markets.

What is the difference between a peach and a nectarine? They are genetically almost the same with the exception of one gene, the one that determines if it will have a fuzzy or  smoothskin. A nectarine is basically a bald peach. They may be used interchangeably in recipes but as far as fresh eating goes, people can have strong opinions about which is best. Many people prefer nectarines because they don’t like the fuzz on a peach. It is more of a textural thing than it is about taste. However, nectarines tend to be firmer, sweeter and more aromatic than their fuzzy cousins.

If you are making a recipe that calls for removing the skin of a peach or nectarine, we recommend the following method:

With a paring knife, make a small "X" in the skin on the bottom of the fruit. Then drop it into a large pot of boiling water for 10-20 seconds. You may do multiple fruits at a time as long as you are able to get them all out of the boiling water within a few seconds of one another. You want to loosen the skin, not cook the fruit.

Immediately place fruit in a bowl of ice water to stop the cooking. Starting at the X on the bottom, lift the skin away from the fruit. It should peel easily if your fruit is ripe. If your fruit is under-ripe, peeling will be more difficult and may require a paring knife. (This is also how you peel tomatoes.)

Combine all ingredients (reserving some chopped nuts) in a bowl and toss. Garnish with remaining hazelnuts.

Get more fabulous peach (or nectarine) recipes for desserts, jams, salads and even cocktails! The Beaverton Farmers Market is an advertiser and supporter of Good Stuff NW. 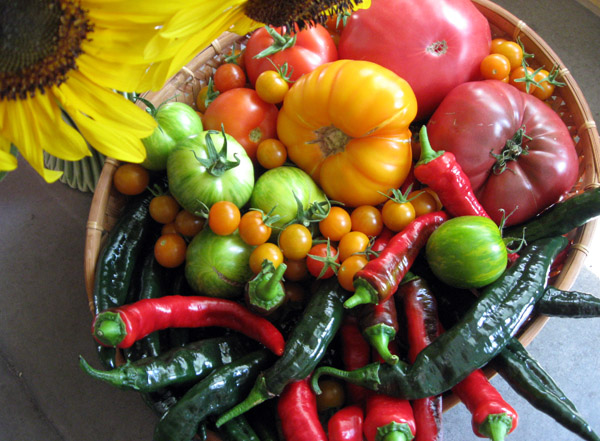 Blossoms are showering our sidewalks with pink snow, tulips and daffodils are out in full force, so it must be time to plant our vegetable gardens, right?

Not so fast, according to Ginger Rapport of the Beaverton Farmers Market, a seasoned plant maven. "Now is the time of year to get your peas, kales, rhubarb, broccoli, beets, carrots and some lettuces in the ground," she said. "It is not the time for planting tomatoes and basil unless you plan on keeping them protected from the cool temperatures and rain."

Another voice of reason comes from Chris Hertel of Sun Gold Farm in Forest Grove. "Don’t be fooled and have patience," he cautions. "We can’t mess with Mother Nature! We can only work with her. Too much rain and cold weather will either harm your tomato plant or make it weak."

Those garden center tomatoes that are waving their leafy appendages at you, begging you to bring them home and plant them in some nice, richly composted soil? They're grown in heated greenhouses, said Hertel. "The plants are not conditioned to anything that Mother Nature is giving us now. If we wait and have patience, the nights will get warmer and days will be drier. That usually happens around Mother’s Day weekend."

So go ahead and get your spring yayas exorcised and plant rows of those hardy spring greens and root veggies, and wait until the soil temperature gets up to at least 55 degrees—60 is even better—to plant those tomato starts. Your summer will be that much sweeter with a little added patience along with that compost. 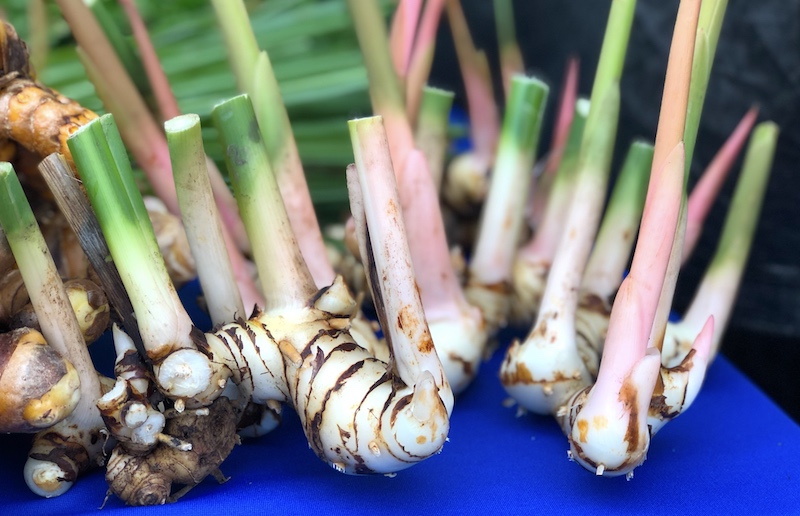 In Season: Galangal, Lemongrass and Turmeric

In the most recent Beaverton Farmers Market newsletter, market manager Ginger Rapport offered a primer on using galangal, lemongrass and turmeric. Normally thought of as exotic ingredients, they've been adapted to grow in Oregon's maritime climate and are now being grown by several local farms. Find them at your neighborhood farmers' market, as well as at Rubinette Produce or other stores that carry produce from local farms.

This flavorful tuber (top photo) is the spicy cousin of ginger and is prized in Thai cuisine for the citrus-like flavor it imparts to soups and its burst of herbal heat in curry pastes. Usually found in Asian grocery stores, you can also find organic galangal at Denison Farms’ booth this Saturday alongside fresh lemongrass and turmeric. 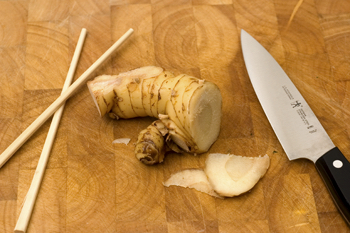 Galangal’s knobby tubers are prepared much like ginger. To be recipe-ready, they are usually peeled and then minced, sliced or grated. It is possible to substitute ginger for galangal when it is unavailable, but we recommend you make the effort to use this zingy aromatic when it is in season. According to Cook’s Illustrated magazine, galangal’s distinctive piney flavor is best used in savory dishes as opposed to sweet dishes where ginger is a better option. 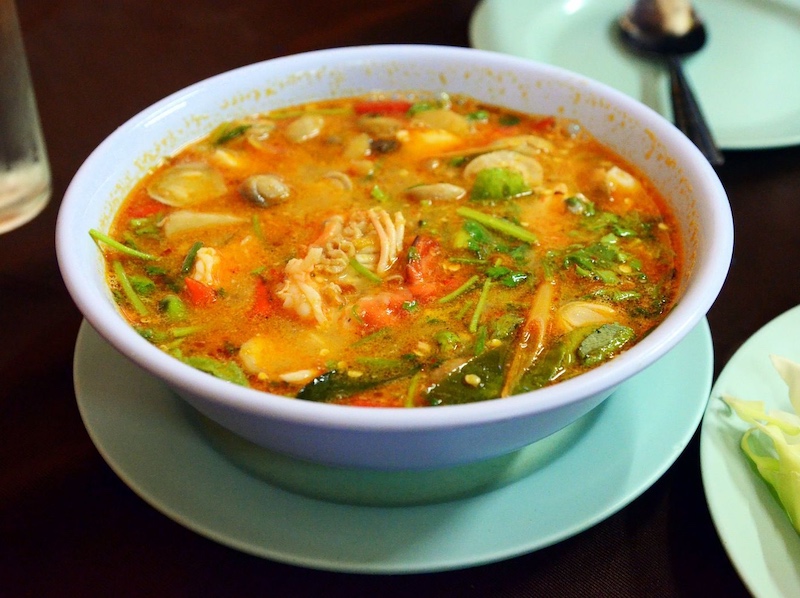 Since fresh galangal is not available all year round, we recommend putting a stash of peeled fresh tubers in your freezer for use when it is out of season. While you are thinking in advance, we recommend freezing lemongrass as well. Together, they provide the exciting flavors required for a variety of delicious dishes including soups, curries and sauces. To freeze lemongrass, trim stalks to the bottom six inches, then transfer to zip-lock bags and freeze.

Galangal is a critical ingredient in the popular hot and sour Thai soup known as Tom Yum or Tim Yam (above right). And, while it's possible to substitute ginger for the galangal, why bother when you are lucky enough to access the real thing? The combination of spicy aromatics, flavorful broth and tasty add-ins make this the perfect dish for our chilly winter days.

Lemongrass is a stalky plant that gives dishes a zesty lemon flavor and aroma. Look for stalks that are fragrant, tightly formed, and a lemony-green color on the lower stalk. 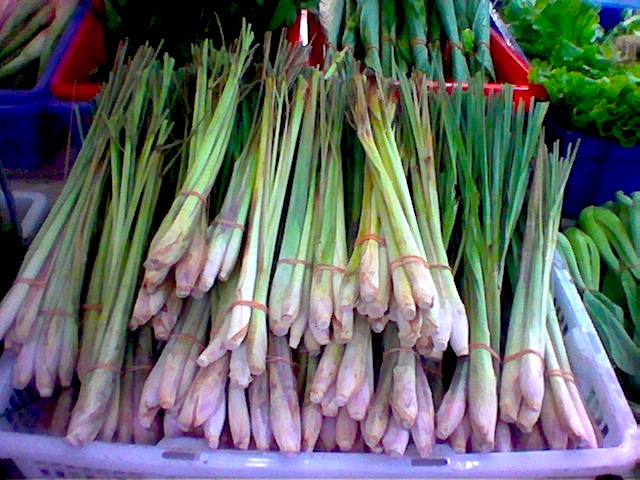 To prepare lemongrass, remove tough outer leaves to expose the pale yellow interior that is softer and easier to slice. Use a sharp serrated blade to slice off the lower bulb, about two inches from the end of the stalk. Discard bulb. Stop slicing when you have cut two-thirds of the way up the stalk, or when it is no longer yellow and fleshy. Because lemongrass is so tough, the slices will need a to processed in the food processor on high, or pounded in a mortar and pestle for a minute or two.

Livelier than its dried form, fresh turmeric has bright orange flesh and is earthy, peppery and slightly bitter. Like ginger and galangal, it is usually peeled before using. 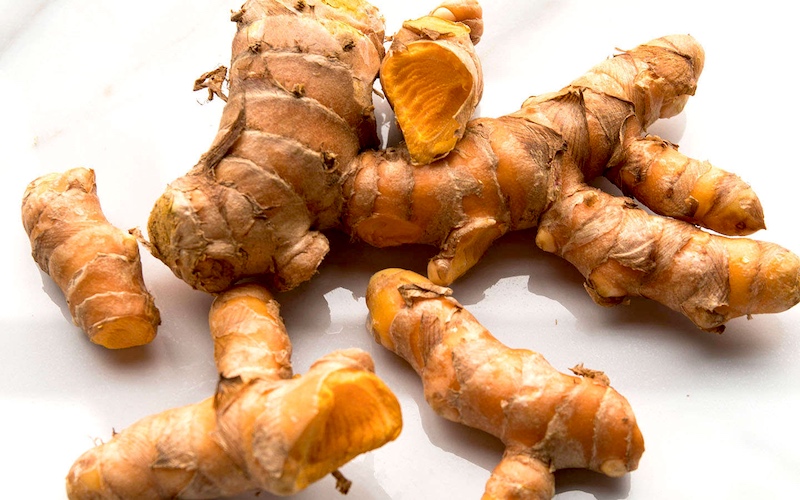 Store fresh turmeric in the refrigerator in a plastic bag, or airtight container, or freeze it for several months. In recipes, one inch of fresh turmeric is equivalent to one tablespoon freshly grated turmeric, or 1 teaspoon of ground turmeric.