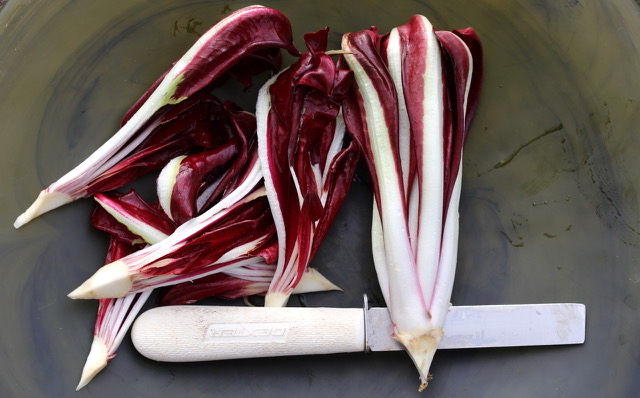 A heads-up from contributor Anthony Boutard of Ayers Creek Farm:

We have started delivering the Arch Cape chicories to our restaurant accounts and some selected stores. These are Rubinette Produce on N.E. Sandy and New Seasons Market at Cedar Hills, Raleigh Hills and Grant Park. Those New Seasons stores are on the delivery route. When we see something special in the produce section, we communicate our pleasure to the staff. Chicories are a very small bit of their portfolio, and the Arch Cape just an atom. A complimentary remark helps catch their attention when it comes time to reorder. If you don’t see them, inquire.

The chicories are heading up two weeks earlier than last year. The February full moon is 11 days earlier this year—February 8th versus February 19th last year—a likely factor. We enjoy the idea of the moon as the conductor our lives. In her gibbous state last night, she traveled the fair sky of the ecliptic with gentle light borrowed from the sun, extending the hunting hours of coyotes. Their exuberant choruses through the night played off against the amorous calls of the great horned owls. We are keeping an eye on their nest as the female will be settling down soon.

A couple years ago, we saw a post where these lovely heads were chopped cross-wise for a salad. It was jarring to the loving farmers' eyes, a shock and abomination that lingers to this day. These chicories should be taken up with our digits, i.e. our fingers, not a fork, and nibbled slowly, contemplatively down the blade. Savoring the sweet nub of the root before picking up another. It is a salad to linger over lovingly, not forked up in haste. To prepare them for this ritual, we cut from the tip of the root nub to the base of the leaf, and then tear them apart lengthwise in four or six pieces. In this manner, as shown above the elegance of the blade is retained, along with the sweet nub. They are best dressed lemon juice which, as a fruit juice, confers a measure of sweetness to the raiment. 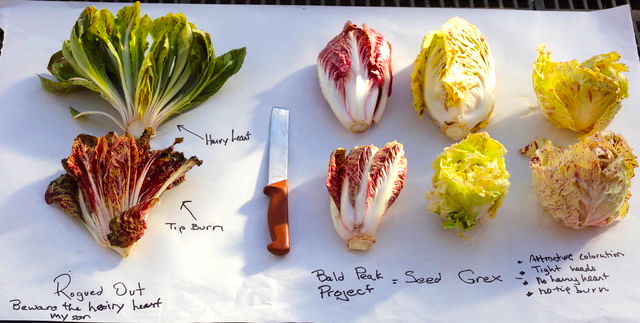 In 2017, we encountered a small cluster of chicories heading up January. It was clear that they were a genetic amalgam of the various sorts we had planted over the years, prompting us to start the "Bald Peak" project. We put them in pots so as to isolate them for pollination purposes, and harvested the seed that August. Last July we planted a row, and now we are selecting plants for our second seed harvest. We enjoyed walking the seed row with our friend Myrtha Zierock this week. Below are some examples of the heads we encountered. They were growing in the Arch Cape rows, and thus fair game for the harvest knife. The seed we harvest in August will ripen too late to resow. It will be planted in the July 2021 for harvest in January 2022. All this requires a schedule because we also breed to grow seed for the Arch Cape. In any given year, only one type of chicory can be grown for seed so as to avoid undesirable cross-pollination.

Why go to all this bother and expense? Most chicory seed is produced in Europe, and is well-adapted to the day-length and weather conditions on the continent. The varieties are highly localized. We were constantly disappointed by the quality of the crop when grown in Oregon. One year, the crop from a prominent and respected seed company only yielded 10% harvestable heads, the others were subpar, to put it politely. Other times, we had germination problems. Because the seed was adapted to areas with relatively dry winters, the plants did not have good rot resistance, leading to tip burn and bottom rot. Useful traits reside in the populations, but they need to be amplified by the rigors of our climate and selection. Farmers put up with enough grief; seed quality shouldn’t be heaped into the emotional equation. Consequently, we now manage and produce our own seed. 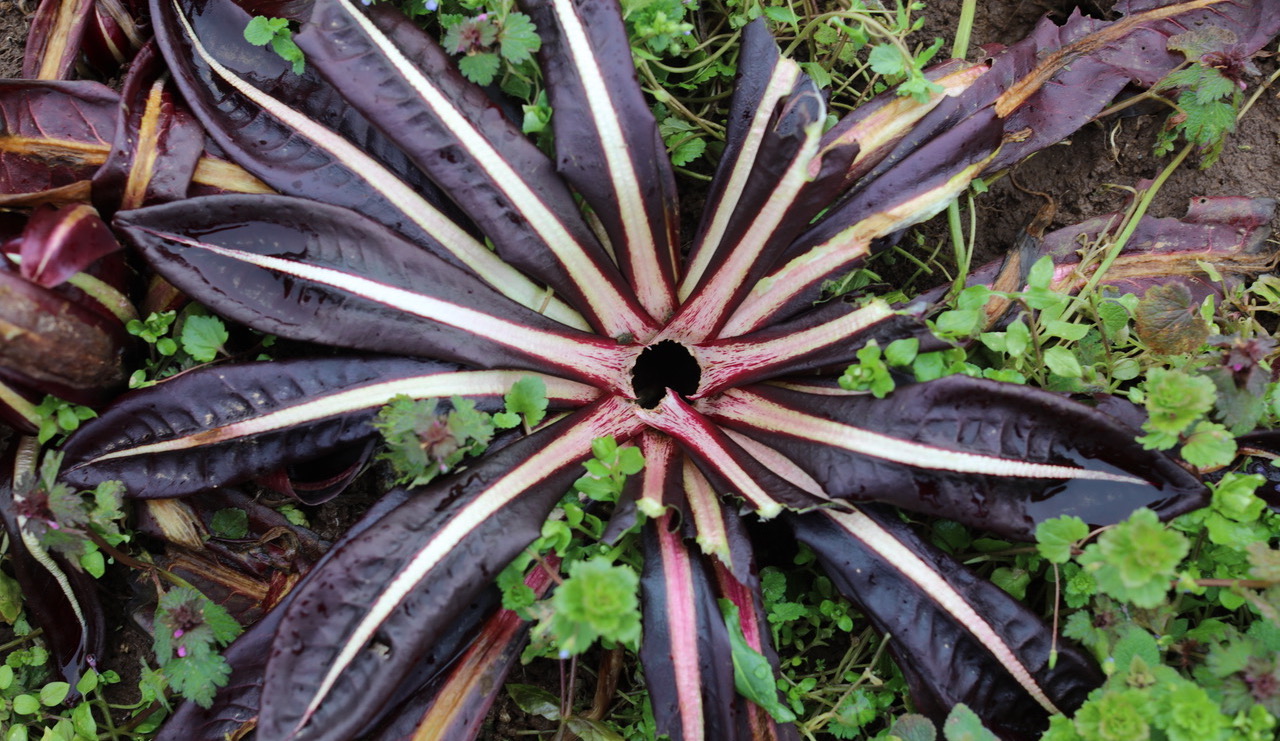 The farm in winter is often portrayed as a dormant time, with barren fields devoid of activity but for the stalks and dead detritus of the previous year's crops. Nothing could be further from the truth, as elucidated by contributor Anthony Boutard of Ayers Creek Farm.

As we work our way down the row, it is clear the farmers are not the only organisms harvesting the chicory. We share the field with three different rodents: pocket gophers, voles and mice. We all have our own harvesting methods and challenges.

Farmers use several different harvest knives. We maintain a fleet of ten six-inch produce knives and eight five-inch produce knives. These have straight blades and a square tip, the sort produce staff have in their holster at the grocery store. These knives are cheap (~$14) and rugged. The six-inch knife is safe and easy to use in the field. The curved blades and sharp points of a chef’s knife are fine in the kitchen but a dangerous menace in the field. A lettuce knife is a more specialized tool, having two cutting edges. Carol and Linda use these to liberate the head from the ground, and shift to the produce knife for trimming. The five-inch knives, a bit too small for the field, are useful for the final trimming at the sink. For other tasks, the heft of the machete-style knives is useful.

Because the knives are used in the abrasive environment of the soil, after a couple of hours the edge is lost, and the knife is swapped out for a sharp one. We go through three or four knives in short order. Back at the shed, we put a fresh edge on the knives with an electric sharpener. A few years ago, a farm magazine had an absurd article telling farmers how sharpen their knives with an oil stone. Even with the mechanical sharpener, the effort takes  30 to 45 minutes. I sharpen my wood block tools with a series of Japanese water stones, but for a knife that will return to soil the next day it is a stupid waste of time. Staff prefer to use a mill bastard file which is a bit coarse for my tastes, but I always defer to them on the matter of tools they use.

Waterproof gloves round out the harvest tools. One hazard with field gloves is that it is easy to wind up with a community of left hand specimens. The cure is to name each pair and write the name on both gloves. For example, we have pairs named Jasper, Maine, Moscow and Olive. Once named, the left and right gloves hang together, a bit of magic I can’t explain.

Our most common companions in the field are voles. In literature, subterranean creatures shunning the sun invariably lack a sense of humor. Dwarfs and trolls, whether in Wagner, the Norse legends or Tolkien, are difficult characters. And so it is with the voles and gophers. During the winter, the gophers are lethargic and consume very little. They are a summertime menace. In contrast, voles become hyperactive in the winter.

Voles are aggressive hoarders, relentlessly caching food. In the chicories, they start with the root, working their way to the crown. Then they pull the leaves into their tunnel. (Top photo: A fine chicory hollowed out by a vole, a beautiful remnant.) Plant materials are masticated and then cached in hollowed out areas where the vegetation ferments, similar to ensilage. They aspire to no leisure activities, never ceasing in building their cache accounts. Voles excavate miles of tunnels, keeping them away from the eyes of predators. The voles have a short tail, small, beady eyes and their ears sit close to the head. They seldom leave the safety of their tunnels. In the winter they live communally in a hole lined with dry grass, conserving their energy. Even during the wettest weather, the underground nest stays dry.

We also encounter mice in the field. They don’t cache vegetation. Mice cache and consume seeds, and they seek out insect larvae and pupae. They eat some foliage to round out their diet. During the winter they also rest communally in grass-lined nests, with one or two sallying forth to feed while the others keep the nest warm. The live in underground burrows, or in hollow logs, irrigation pipes, bird houses, cars or any place providing shelter. They have long tails for balance, large ears to hear advancing predators and bulging eyes that give them a range of view, all valuable for an animal that forages above ground. They are adept climbers, and they have a more beguiling presence than their subterranean-dwelling kin.

The mouse seed caches are visible in both the cultivated and uncultivated areas of the farm. Not every store of seeds is consumed, and those left uneaten sprout. In the photo above, tufts of native grass betray an unused granary. In the field, clumps of chickpeas, wheat, corn and favas in a similar pattern are common.

What eats get eaten. A healthy population of rodents is the base for a healthy population of predators. We have barn and great-horned owls, kestrels, red-tail hawks, great blue herons and weasels all partaking of the fine rodent riches. The barn owls hunt in the open fields and the great-horned owls tend to stay in the cover of the oak savannah. No, predators do not control the rodent populations; it is exactly the reverse, rodent populations drive survival of the predator young. Without adequate food, the young languish and die.

Both owls currently have chicks in the nest, and a good rodent year means more of these chicks will become adults. The owls tear apart the rodents, regurgitate a cast or pellet of fir and bones. The herons gulp down their prey whole. Red-tailed hawks and kestrels tear apart their prey. The kestrels don’t like the stomachs, so they eviscerate their prey, leaving a pile of guts near the feeding perch. The kestrels are more resilient than owls and other raptors because they feed happily on larger insects such as grasshoppers, frogs, worms and small snakes. As an aside, owls are more closely related to parrots than the hawks and falcons.

Aside from poison, which we would never use, there is no means of controlling these small rodents. Even poison baits are a stop gap measure of dubious efficacy, just a damaging outlet of the farmer’s anger. The gophers, mice and voles are part of the endeavor and, in their own right, remarkable creatures. A heathy ecosystem self-corrects. Rodent populations are cyclical. In 2013, we had intense rodent pressure and lost the entire chicory crop. As a concession prize, a young bobcat took up residence for several months. Tito was not happy about the matter, though. The following year, voles were scarce.

We are on a wildlife corridor, so various creatures, elk, deer and mink move through the farm. Thursday night, Abel saw a cougar and her kits near the barn. They are probably moving to the ridge dominated by Bald Peak in search of prey, deer in particular, but quite possibly small livestock as well.

Read more of Anthony's Farm Bulletins. Photo of vole from Wikipedia. All other photos by Anthony Boutard.